Most Latvian nationals indicated Dublin was their county of usual residence in April 2016 (5,771 Latvian persons, 29% of the population). Unlike the Brazilian, Spanish, Italian, French, and German nationals the Latvian population mainly lived in the suburbs rather than the city, as seen in the inset of Figure 6.1, with a particularly high concentration in Fingal (15% of the Latvian population, 2,895 persons). Looking at individual Electoral Divisions outside of county Dublin, relatively high proportions of Latvian nationals were found to be living in Dundalk, Navan, Tullow, Portlaoise, and Monaghan, shown in purple in Figure 6.1. 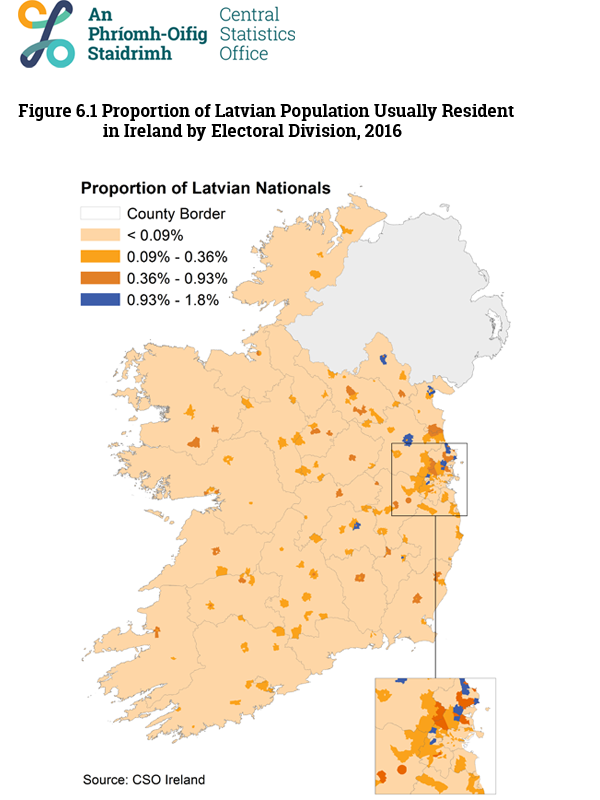 The age breakdown of the Latvian and State population can be seen by clicking an option below:

Table 6.3 shows the top three broad industrial groups among the Latvian population in April 2016 and the proportion of the population at work in each industry. Approximately one fifth of Latvians at work were in the retail industry (2,339 persons), making it the industry with the greatest number of Latvian nationals. Cashiers and retail managers were two of the most common occupations for Latvian nationals within the retail industry.

Semi-detached houses and flats/apartments were the most popular accommodation types to rent among Latvian headed households, with approximately one third living in each.

While renting accommodation remained the most common among Latvian headed households the level of home ownership increased by over one third (35%) between 2011 and 2016.