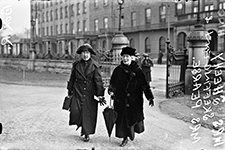 Francis Sheehy-Skeffington did not enter his wife Hanna’s details on the 1911 Census form at their home (see the written note “Information Refused” on the form) as the suffragettes had a campaign of non-cooperation with the 1911 Census. Francis recorded four people in the house: himself (aged 32), his one year old son (Owen) and two female servants, Philomena Morrissey (aged 23) and Mary Butler (aged 21). The enumerator, James Crozier, attempted to circumvent the boycott by recording Hanna’s details. Almost all of the information was incorrect. He entered her name as Emily, (but her correct name was Johanna), had the wrong age of 28 (her real age was 33), he recorded their marriage as 3 years in length (but they had been married for 8 years) and recorded her place of birth as Dublin (she was born in Kanturk, Co. Cork). He was correct in recording that they had had one child and that this child was alive (Owen Lancelot). The enumerators, who were from the police force, had extensive powers to make enquiries locally about those who refused to fill out the form.

Johanna Mary Sheehy, known as Hanna, was born in Kanturk, County Cork, in May 1877. She belonged to a prosperous farming and milling family. Her father, David Sheehy (1844-1932), was a member of the IRB and later an MP, and had been imprisoned no less than six times for revolutionary activities2. Hanna was a highly influential figure during the suffragette movement and was also active in the realms of socialism and Irish independence. She married Francis Skeffington in 1903. They joined their names together on marriage, a symbol of the equality in their relationship. Both were founder members of the Irish Women’s Franchise League in 1908 which fought for women’s suffrage. They had one child Owen Lancelot in 1909. She was fired from her teaching post in 1912 following her arrest for breaking windows during a militant suffragette protest.  In 1912 she and her husband founded the Irish Citizen newspaper. She was active in the labour movement assisting in the soup kitchen at Liberty Hall in 1913.

Like her husband Hanna was a Pacifist. She attended a meeting in Wexford organised by John Redmond for conscription to the British Army.  Huge crowds attended as conscription was so popular and trains had been organised from Waterford and Kilkenny. Redmond was about to address the audience when a very heavily veiled Hanna stood up on a box asking people to repudiate Redmond and his recruiting. She was torn down from the box by the crowd and her clothes almost ripped from her. She was very badly mistreated by the crowd and if it were not for the intervention of the police and some members of the public she would have been thrown into Wexford Bay. “A much battered and torn and, I am sure, very much bruised, Mrs Skeffington was rescued3”.

During the Rising Hanna did not join the rebels but she brought food and messages to the various outposts. Her elderly uncle, a priest named Eugene Sheehy4, a well-known Land League and IRB member, was at the GPO as a confessor to the rebels. She was in the confidence of some of the leadership as they selected her to act as a member of a civil provisional government to come into effect if the Rising was prolonged. She considered the Rising as the first point in Irish History where the struggle for women’s citizenship and national freedom converged. Her husband Francis, who was not involved in the Rising, was arrested while trying to prevent looting. He was detained by Captain Bowen-Colhurst and shot without a trial. She refused £10,000 in compensation and instead looked for a court martial for her husband’s killer.

After the Rising she worked tirelessly to convince the American public to support the Irish cause and conducted a series of lectures there to raise funds. She went to America with Margaret Skinnider and Nora Connolly but the US authorities did not want her there as she was “talking too much5" and so she returned to Ireland.

In 1917 she was appointed to the executive of Sinn Féin, rising to become the Director of Organisation. In the War of Independence she served as a judge in the Republican law courts in Dublin and during the Civil War she helped to set up the Women’s Prisoners’ Defence League. In the 1930’s Hanna was assistant editor of An Phoblacht.

Hanna Sheehy-Skeffington died in April 1946 and is buried beside her husband Francis in Glasnevin cemetery.