Welcome to this Central Statistics Office (CSO) publication to mark the centenary of 1916. We decided to commemorate this momentous occasion by searching for statistics from Ireland for the 1916 period which illustrated what life was like for people living 100 years ago.  We found a range of statistics on themes including population, births, marriages, deaths, education, crime, prices, transport and agriculture.  This report contains 72 tables on a wide variety of topics. We have also published a book containing a selection of the content from this report. I hope that you enjoy reading the stories we found as much as we enjoyed collecting the statistics and I would encourage you to browse the varied and interesting data we gathered.

Data for Ireland in the tables and text refers to the area covered by the Republic of Ireland. In some instances data was available only for the island of Ireland but this is noted on the tables concerned.

The population of Ireland increased by 46% in the 100 years between 1911 and 2011, from 3.1 million to 4.6 million people.  Today in Ireland there are fewer young people and more middle aged people compared with Ireland in 1911. There is much more variety today in names for baby boys and girls compared with over 100 years ago. Irish names for babies such as Aoife or Oisín, which were rare in 1911, are now very popular.

Dublin was a city of extremes in housing in 1911, when 22% of dwellings were large homes (with 10 or more rooms) and 36% were one room tenements. Nearly half of workers were in Agriculture, in comparison to just 5% today. One in ten workers in 1911 worked as a domestic servant compared to only a few thousand people in 2011. The rate of illiteracy in Ireland was 8.3% in 1911 and varied widely across the country, with the lowest rate in Dublin and the highest rates in Donegal, Galway, Mayo and Waterford. 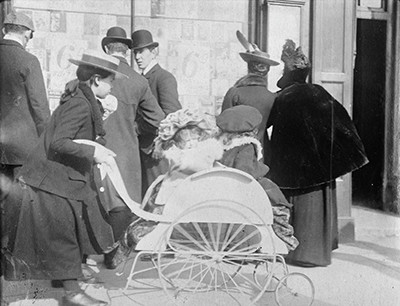 Average daily attendance at National schools in 1916 was 70.7% compared to 94.1% in 2013. Nearly 7,000 second level students took the Junior Intermediate Examination in 1916 and 58% of the candidates were male. In 2015 there were just under 60,000 candidates for the Junior Certificate exam and about 50% of the candidates were male. Over 7,900 children lived in Industrial schools in 1916 and 708 in Reformatory schools. Of the 822 children admitted to Industrial schools in 1916, 146 were less than six years old while 146 were aged between six and eight years of age.

The vast majority (92%) of marriages in 1916 were Catholic ceremonies but by 2014 this had dropped to just under 60%. About one in eight deaths in 1916 was due to bronchitis and pneumonia which killed 6,708 people, with another one in eight deaths caused by tuberculosis (TB) which killed 6,471 people. Most deaths in 2014 occurred in older age groups but deaths in 1916 were spread more evenly across all age groups – one in five deaths in 1916 occurred to a child under 15 years of age. Life expectancy has risen strongly since 1911 for all age groups, with the greatest increases for younger age groups. A baby boy born in 2011 can expect to live for nearly 25 more years than a baby born in 1911, while a baby girl born in 2011 can expect to have an extra 28.6 years of life compared to a girl born in 1911.

In 1916 the overall fiscal situation in Ireland was very favourable for the British Government. Nearly £24 million was raised in Ireland but just over half of this, £12.6 million, was spent in Ireland, giving a surplus of over £11 million towards the war effort in Britain. The basket of goods used for the Consumer Price index in 1922 shows that just over 57% of average household expenditure was on food and non-alcoholic drink 1911, compared to just 11.4% in 2011. The number of farms fell by over 60% between 1915 and 2010 while average farm size in Ireland more than doubled, increasing from 14 to 33 hectares over the same time period.

Nine counties saw population declines between 1911 and 2011, - Leitrim, Mayo, Roscommon, Cavan, Sligo, Monaghan, Longford, Kerry and Donegal. These decreases ranged from a 50% drop in Leitrim to a decrease of 4% in Donegal. 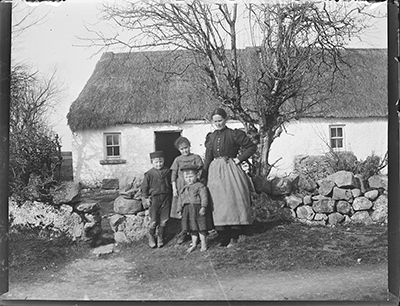 Of the top ten names used for baby boys in 1911, six names make it into the top 40 names for boys in 2014 – John, Patrick, James, Michael, Thomas and Daniel. The name James was the third most popular name in 1911 and was the second most popular in 2014.  By 2014 Irish names for baby boys have risen in popularity. Ten of the names in the top 40 in 2014 are Irish in origin – Conor, Seán, Oisín, Liam, Cian, Cillian, Darragh, Fionn, Finn and Rian. None of these “Irish” names are in the list of the most popular 40 names for baby boys in 1911. Se we can see that over the last 100 years parents have enthusiastically embraced using names with an Irish origin for naming baby boys. 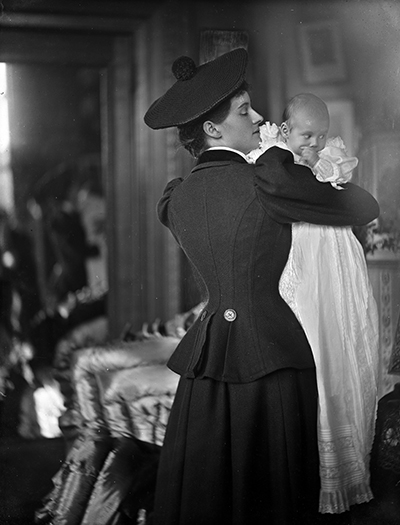 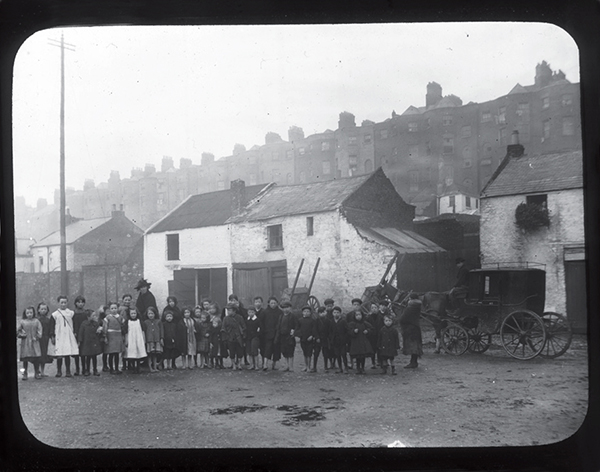 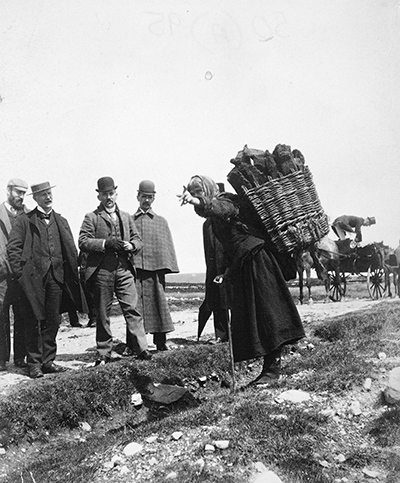 Photo: Members of the Congested Districts Board receiving directions from a local woman

The vast majority (85.4%) of people in Ireland in 1911 had been born in the county in which they were living on Census day. By 2011 this proportion dropped to 61.4% illustrating that the population of Ireland today is much more mobile than 100 years ago. In the 1911 Census, one in ten people were born in another county in the Republic but in 2011 this proportion had increased to two out of ten. Less than 1% of the Irish population was born outside the islands of Ireland and Britain in 1911 but by 2011 this proportion had increased strongly to 11.2% illustrating the important part played by inward migration in recent times in Ireland. (Table 2.6) 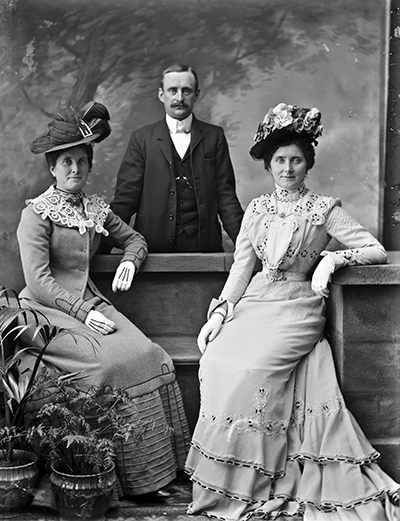 There were 1,784 people arrested in Dublin in connection with the Easter Rising, of whom 76 were female. The court martials which were held tried 88 people, including 1 woman. 14 men were executed while 72 men and 1 woman were imprisoned. Of those arrested but not tried by court martial, 947 people (including 3 women) were interned.

In 1916 parents were required to send children between the ages of 6 and 14 to school for at least 75 days a year but rural areas were excluded, as children could be kept out of school if they were prevented by “..domestic necessity… husbandry and the ingathering of crops, or giving assistance in the fisheries, or other work requiring to be done at a particular time or season…”. Average daily attendance at National schools in 1916 was 70.7%, so on any given day in 1916 only seven out of ten pupils who were enrolled had attended school. School attendance data for Primary schools in 2012/2013 was 94.1%. (Tables 2.12 and 2.13)

The Intermediate Examinations in 1916 were taken by second level students and had three levels – Junior, Middle and Senior. Nearly 7,000 students took the Junior exam in 1916 and 58% of the candidates were male while about 1,400 took the Senior exam and over 60% were male at this level. In 2015 there were just under 60,000 candidates for the Junior Certificate  and about 55,000 for the Leaving Certificate and the gender split was about 50:50 for both. (Tables 2.17 and 2.19) 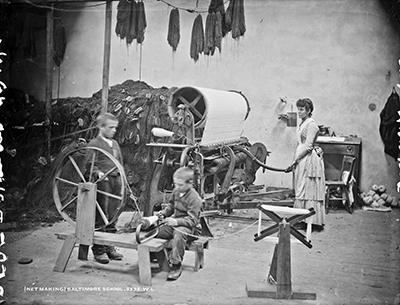 There were 5,271 deaths in the area now covered by the Republic of Ireland to babies under 12 months of age in 1916 and the number for the whole island was 7,627. The main cause recorded for deaths in babies less than one year old in 1916 was malnutrition and weakness which accounted for 2,056 deaths or 27% of the total on the island.  Convulsions was given as the reason for 11.7% of infant deaths while diarrheal diseases accounted for 11.6% of infant deaths. (Tables 3.1, 3.3 and 3.4)

About one in eight deaths in 1916 was due to bronchitis and pneumonia which killed 6,708 people with another one in eight deaths caused by tuberculosis (TB) which killed 6,471 people. Heart disease was identified as the cause of death for 5,373 people in 1916 while cancer caused 2,679 deaths. Infectious diseases (such as measles, scarlet fever, whooping cough, diphtheria) and influenza killed 2,092 people. 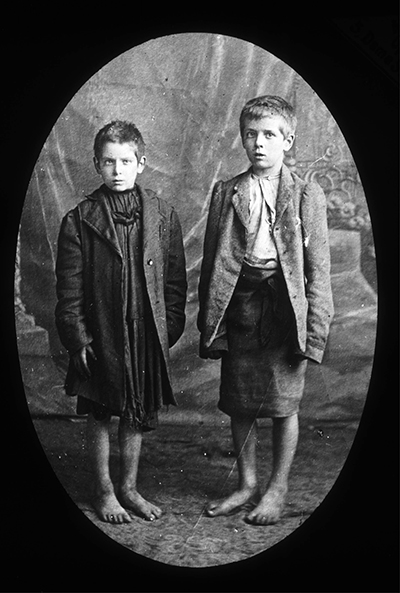 The thirty two county economy of Ireland was dominated in 1916 by four industries; Agriculture, Linen production, Shipbuilding and Brewing & Distilling.  The first three of these activities were positively impacted by the war with increased demand for food, linen and ships directly linked to the war effort.  Only Brewing and Distilling suffered in this period from sharp increases in excise duty and other controls on production. The number of barrels of beer produced in Ireland fell from 3.5 million in 1914 to 2.9 million by 1917 while exports of porter fell from 887,591 hogsheads in 1915 to just 490,422 by 1918. (A hogshead was defined as a barrel and a half.)

The Government spent £11.5 million on the island of Ireland in 1911 and raised £10.7 million revenue, giving a deficit of about £0.8 million. By 1916 the overall fiscal situation in Ireland was very favourable for the British Government. Nearly £24 million was raised in Ireland but just over half of this, £12.6 million, was spent in Ireland, giving a surplus of over £11 million towards the war effort in Britain. Taxes on imported goods such as tea, sugar and tobacco and increased duties on alcoholic products, as well as a lowering of the exemption limit for income tax, contributed to the large increase in Government revenue between 1913 and 1916. (Tables 4.1 to 4.9) 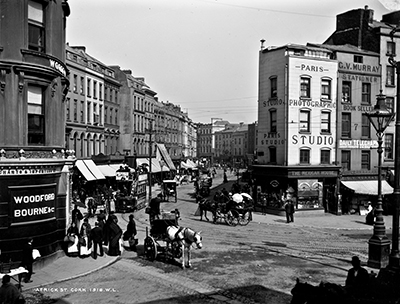 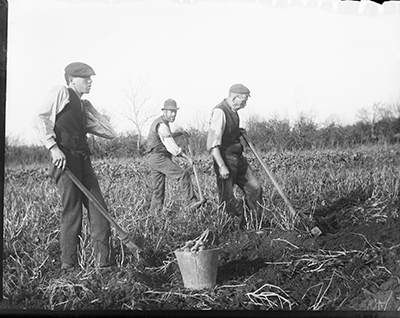 There were 9,850 cars in Ireland in 1915, (with cars registered in every county in Ireland), and there was 7,580 motorcycles. By 2014 there were 1.9 million private cars and 36,573 motorcycles. Ships were the only method of transporting people and goods to and from the island of Ireland to the outside world in 1916. In 1911 there were more than 80 cross-channel sailings per week to Britain from Dublin port. The ports on the island of Ireland in 1913 handled 26.5 million tonnes of goods and this compares with 47.5 million tonnes of goods handled in 2014.