Quarterly increase of 1.7 per cent in Real GDP 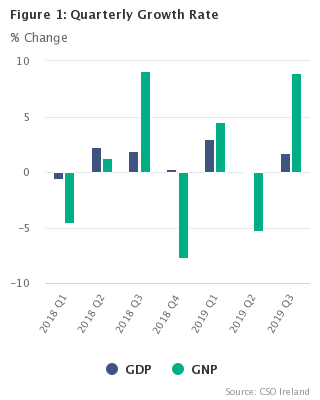 On a seasonally adjusted basis, initial estimates indicate that GDP in volume terms increased by 1.7 per cent for the Q3 quarter of 2019. Real GNP increased by 8.9 per cent over the same period.

Value added increases in almost all sectors of the economy

Value added of Financial & Insurance Activities rose by 5.7 per cent in volume terms in Q3 2019 compared with the previous quarter. Professional, Administrative & Support Services recorded a 5.1 per cent increase in real terms with the Public Administration, Education and Health sector recording a 1.5 per cent increase, see Table 5. Arts & Entertainment and Construction grew by 1.8 per cent and 1.3 per cent respectively over the same period. Industry (excluding Construction) grew by 1.1 per cent quarter-on-quarter in Q3 while Information & Communication increased by 0.8 per cent over the same period.  Agriculture recorded a decline of 3.2 per cent quarter-on-quarter with Distribution, Transport, Hotels & Restaurants recording a decline of 1.0 per cent over the period.

On the expenditure side of the accounts (Table 7) and following on from the globalisation effect in Capital Investment and Imports that took place in Q2 2019, Capital formation decreased by 55.3 per cent or €25.2 billion in Q3 compared with the previous quarter. Imports decreased commensurately by 22.5 per cent (€24.2 billion) in Q3 2019 compared with Q2 2019.  These two impacts are largely offsetting and do not have a significant effect on the GDP growth rates reported.  Exports increased by 2.4 per cent which meant that overall net exports increased by €26.8 billion quarter-on-quarter. Personal Consumption Expenditure increased by 0.9 per cent and accounted for almost 47 per cent of domestic demand in Q3 2019. Government expenditure showed an increase of 1.2 per cent over the same period.

Total domestic demand declined by 27.8 per cent in Q3 2019 over Q2 2019 on foot of the decline in Capital Investment. When combined with the €26.8 billion increase in net exports the result was an overall increase in real GDP in Q3 2019 of 1.7 per cent. Factor Income outflows were 1.1 per cent higher in Q3 2019 (€20,496m) compared with Q2 2019 (€20,274m) and consequently GNP increased by 8.9 per cent in the period. Modified Domestic Demand, an indicator of domestic demand that excludes the impact of trade in aircraft by aircraft leasing companies and trade in R&D service imports of intellectual property, increased by 3.6 per cent in Q3 2019 over Q2 2019, see Annex 4B.

Initial estimates for the third quarter of 2019 indicate that there was an increase of 5.0 per cent in GDP in real terms in Q3 2019 compared with Q3 2018. Information & Communication made the most positive contribution to the Q3 result, rising by 22.4 per cent with Agriculture recording an increase of 15.2 per cent.  Increases were also recorded in Financial and Insurance activities (9.5 per cent), Professional and Administrative Services (5.6 per cent), Public Administration, Education and Health (4.1 per cent), Real Estate activities (2.8 per cent), Construction (2.3 per cent), and Industry (excluding Construction) (1.3 per cent). The Distribution, Transport, Hotels and Restaurants sector declined 1.6 per cent year-on-year with Arts and Entertainment exhibiting a decline of 2.5 per cent.

Factor Income outflows were 25.8 per cent higher than in the same quarter of 2018 resulting in a decrease in GNP of 0.2 per cent year-on-year.