Show Menu
You are here: Home / Statistics / Life in 1916 Ireland: Stories from statistics / Census and People of the 1916 Rising / Census and Other Executed Men / Con Colbert 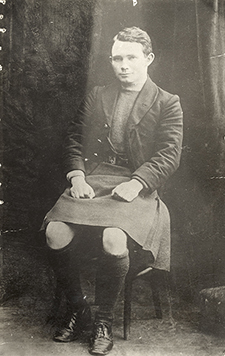 The Census return for 1901 recorded Con Colbert living with his widowed father, Michael (50), a farmer, and five siblings. John (18) was recorded as a farmer’s son and Johane (16) was recorded as a farmer's daughter. The four younger children - Con (11), James (10), Dan (9), and Bridget (8) were recorded as scholars. There is also a visitor, William Colbert, whose occupation is stated as harner's maker, (possibly harness maker was intended to be written). All in the household are proficient in both English and Irish.

The Census return for 1911 recorded Con living with three of his sisters and two boarders. Catherine (30) was stated to be the head of family and was a dressmaker while Elizabeth (23) was a typist. Mary O’Brien (31) was also listed as a sister, she was a nurse and a widow.  According to this Census, Con was proficient in both Irish and English.

Con Colbert, known the family as Cornelius, was born in Castlemahon, Co. Limerick, the fourth youngest of a family of thirteen. He was a teetotaller and a devout Catholic. A few years later the farm was sold and the family moved to another farm in Athea. Here he attended national school. When Colbert’s mother died the family separated to make a living. Catherine Colbert, a sister, moved to Ranelagh Road and Con subsequently joined her there. He found employment in Kennedy’s Bakery as a book-keeper where he worked until the Rising.

Colbert became involved with Na Fianna, a group founded by Bulmer Hobson and Countess Markievicz in 1909. The organisation placed emphasis on the Irish language and culture. He also joined the Gaelic League. He took his work for the Fianna and the Volunteers very seriously and it used up all his spare time.2 He applied himself to gain proficiency in various activities and skills which included drills, marching, signalling, map-reading first aid and the use of small fire arms. Pádraig Pearse was looking for a drill-instructer with Irish for St. Edna’s and he hired Colbert for the role. Bulmer Hobson was deeply involved with the IRB and brought Colbert into this organisation.

Colbert attained the rank of captain in Éamonn Ceannt’s 4th Battalion of the Dublin Brigade. He was widely active in the drilling and training of the Volunteers and was highly respected in na Fianna, the Volunteers and the students of St. Endas. Admired and trusted by the leaders of the forthcoming Rising, Colbert was posted as Pearse’s bodyguard in the days immediately before Easter 1916.

When the Rising began Colbert was assigned to Watkin’s Brewery, Ardee Street, close to the South Dublin Union held by Éamonn Ceannt. Later in the week, Colbert moved to the Jameson Distillery in Marrowbone Lane to reinforce the fifty Irish Volunteers and twenty two members of Cumann na mBan.  When the order from Thomas Mac Donagh came to surrender, Colbert took command of the Distillery to spare the life of his commanding officer, Seamus Murphy, who was a married man. Following the surrender, the Volunteers and Cumann na mBan marched to Richmond Barracks where they were jeered at by people along the way.

When Captain Con Colbert was asked by a fellow prisoner what was likely to happen his reply was "For you a long term of imprisonment. For myself, I fear it will be a firing squad3"

Following a court-martial, Colbert was transferred to Kilmainham Gaol.

According to his sister’s Witness Statement, Colbert was in love with a girl called Lucy Smith; she later married a Tom Byrne who was Colbert’s love rival. A letter was written to her by Colbert during Easter week; it was given to Rose McNamara to deliver but was never found.

In a letter before he died to his sister Lila he states “Perhaps I would never get the chance of knowing when I was to die again, and so I’ll try and die well4.” He would not allow his family to visit while he was imprisoned as he thought it would cause too much upset.

Con Colbert was shot by firing squad on 8th May 1916, the same day as Éamonn Ceannt, Michael Mallin and Seán Heuston. Along with all of the executed leaders, his body was buried in quicklime at Arbour Hill Prison.

Colbert Railway Station in Limerick, Con Colbert Road in Dublin and Colbert Street in Athea are all named in his honour.