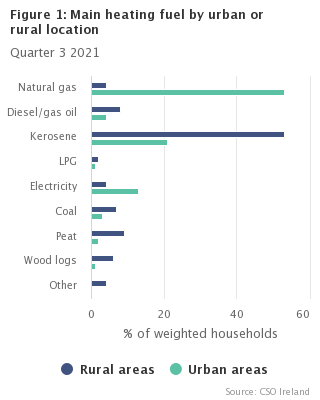 Some of the main findings from the CSO Household Environmental Behaviours survey on Energy Use are:

Dublin was also the region most likely to use electricity as the main household heating source (18%) while electricity was used by just 6% of Midland households as their primary source of heating. Use of solid fuels (wood logs, coal, peat and wood pellets) also varied by region and was highest in the Midland region where 31% of households used solid fuel as their main heating fuel. It was lowest in Dublin with 2% of households reporting using a solid fuel as their primary heating fuel.