This release has been compiled during the COVID-19 crisis. The results contained in this release reflect some of the economic impacts of the COVID-19 situation. For further information see Press Statement Vehicles licensed for the first time December and Year 2020. 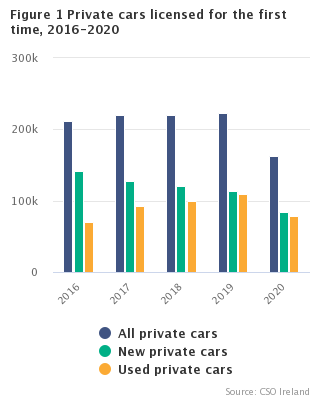 In 2020, 84,309 new private cars were licensed for the first time, a decrease of 25.6% compared with the previous year. See our infographic.

Electric and hybrid cars continue to grow in popularity. These two categories of vehicles combined accounted for 19.7% of new private cars licensed in 2020, compared with 12.7% in 2019. The number of new hybrid and new electric cars licensed between January and December grew by 1,754 (16.1%) and 497 (14.4%) respectively despite an overall drop in new cars licensed for the period. See table 7.

In 2020, grey was the colour of choice for most new Volkswagen, Toyota, Hyundai, Skoda and Ford private cars licensed. See table C.

Show Table 8: Percentage of new private cars licensed for the first time by most popular colour, 2016 - 2020

The vehicle licensing figures are compiled from data supplied by the Driver and Vehicle Computer Services Division of the Department of Transport. The data provide details on the number of private cars, goods vehicles, motor cycles and other vehicles licensed for the first time in each city and county council, classified by make and size, during a given month.

The CSO produces vehicle licensing statistics on a monthly basis. Vehicle registration data has not been published on the CSO PXStat since June 2010.

Scan the QR code below to view this release online or go to
http://www.cso.ie/en/releasesandpublications/er/vlftm/vehicleslicensedforthefirsttimedecemberandyear2020/