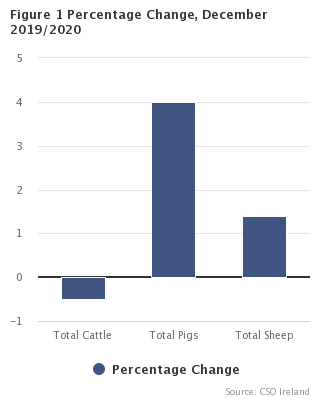 This release presents estimates for livestock numbers (cattle, sheep and pigs) in December 2020 at State level. The estimates for cattle and sheep are obtained from administrative data from the Department of Agriculture, Food and the Marine (DAFM). Breeding bull data is received quarterly from the Irish Cattle Breeding Federation (ICBF). The estimates for pigs are based on returns from the CSO December Pig Survey.

Cattle: The results for cattle are obtained from DAFM’s Animal Identification and Movement (AIM) system, formerly known as the Cattle Movement Monitoring System (CMMS). This system was introduced at the beginning of 2000 and involves electronically recording data on animal movements. Breeding bull data is received quarterly from the Irish Cattle Breeding Federation (ICBF). The bull data was revised from December 2010 to December 2019 in September 2020. These revisions also resulted in changes to the male cattle 1-2 years and the male cattle 2 years and over categories.

Sheep: The estimates for sheep are obtained from DAFM National Sheep & Goat Census undertaken on 31st December 2020. The 2020 results from the census are provisional. Final figures will be published on PxStat by the end of May, 2021. Click here for a link to PxStat Table AAA06 Farm Animals in December by Type of Animal showing livestock numbers including sheep. The estimates from December 2017 represent a break in the data series previously published.

The DAFM National Sheep and Goat Census is carried out under EU Regulation 21/2004 which obliges member states to carry out a census of sheep and goats annually. The first census took place in 2005.

Rounding: As a result of rounding, there may be slight discrepancies between the sum (or difference) of the constituent items and the total shown. Percentage changes have been calculated using actual figures.

Scan the QR code below to view this release online or go to
http://www.cso.ie/en/releasesandpublications/er/lsd/livestocksurveydecember2020/