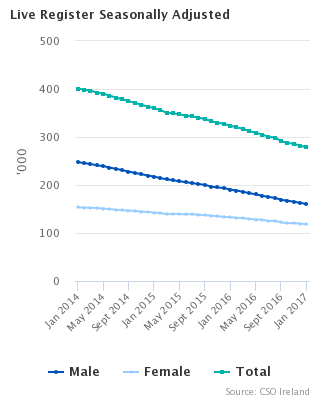 Craft and related (18.3%) remained the largest occupational group1 on the Live Register in January, despite the fact that the number in the group fell over the year by 11,247 (-18.2%) to 50,644.  The second largest annual percentage decrease was in the Sales group, which decreased by 15.5%.

The two smallest occupational groups in January were the Associate professional and technical and the Managers and administrators groups which accounted for 3.1% and 4.7% of the Live Register respectively. See table 5 and figure 4.

Data up to the end of December 2016 on the number of people availing of a range of programmes targeted primarily at the long-term unemployed (over 12 months) and other welfare recipients is provided in the Annex – Number of persons availing of Activation Programmes table.

Prior to January 2017, the DSP provided tabulated claimant counts directly to the CSO to facilitate production of the Live Register. These claimant counts were grouped by age, gender, occupation, nationality, duration, region, county and local welfare office. Data provided in this fashion is available from 1967 to December 2016.

As claimant count microdata is retrospectively available to January 2012, previously published Live Register data for this period have been revised with data now also produced from this claimant microdata. These revisions are generally minor in nature and are included in this release as well as all relevant Statbank tables.

The basis of the area analysis in Live Register statistics is the Department of Social Protection local office of registration.  The areas served by Local Employment Offices do not correspond to specific geographic boundaries.  Therefore, registrants at a given local office do not necessarily come from a particular region or area which can be precisely delineated e.g. data for the Cork City Local Offices of Registration refers to all persons signing on in Cork City but may include persons not resident in Cork City.  The latest available Live Register data by Province, County and Local Office of Registration will be released on the CSO website through the CSO StatBank one day after the publication of this release, see link here.

Scan the QR code below to view this release online or go to
http://www.cso.ie/en/releasesandpublications/er/lr/liveregisterjanuary2017/