Standardised unemployment rate at 10.5% in January 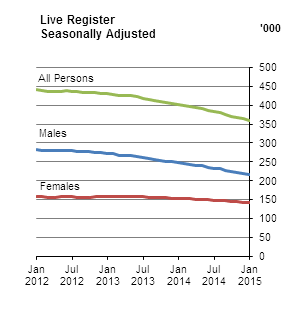 The standardised unemployment rate (SUR) in January 2015 was 10.5%, down from 10.6% in December 2014.  The seasonally adjusted unemployment rate from the most recent Quarterly National Household Survey (QNHS) was 11.1% in the third quarter of 2014. See table 3.

Craft and related (20.0%) remained the largest occupational group1 on the Live Register in January, despite the fact that the number in the group fell over the year by 12,797 (-15.2%) to 71,640.  The second largest annual percentage decrease was in the Sales group (-11.3%). The two smallest occupational groups in January were the Associate professional and technical and Managers and administrators groups which accounted for 2.8% and 4.4% of the Live Register respectively. See table 6 and graph below.

Data up to the end of  December 2014 on the number of people availing of a range of programmes targeted primarily at the long-term unemployed (over 12 months) and other welfare recipients (including Lone Parents) is provided in the Annex – Live Register Activation Programmes table.

The calendar quarter estimates for Q3 2014 (adjusted for seasonality) are:

Scan the QR code below to view this release online or go to
http://www.cso.ie/en/releasesandpublications/er/lr/liveregisterjanuary2015/