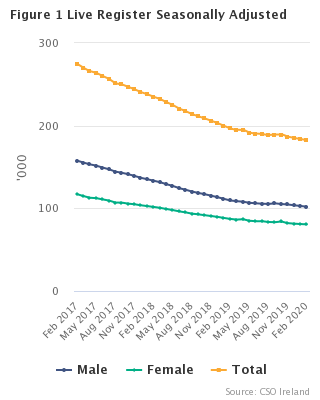 Craft and related (17.0%) remained the largest occupational group1 on the Live Register in February 2020. The number in the group fell over the year by 2,507 to 31,053.  The Sales group had the largest annual percentage decrease (-11.0%).  The Plant and machine operatives group had the second largest annual percentage decrease (-9.9%) in February 2020. See table 5 and figure 4.

The two smallest occupational groups in February 2020 were the Associate professional and technical and Managers and administrators groups which accounted for 3.5% and 5.5% of the Live Register respectively. See table 5 and figure 4.

For further information or assistance use the contact details below or e-mail labour@cso.ie

Scan the QR code below to view this release online or go to
http://www.cso.ie/en/releasesandpublications/er/lr/liveregisterfebruary2020/