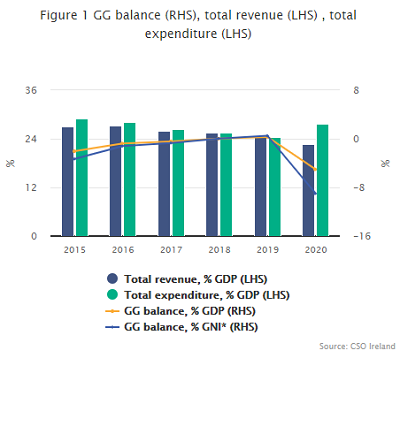 The significant increase of €16.2bn (18.6%) in government expenditure in 2020 is due to COVID-19 measures. There was a rise of €11.8bn in subsidies (including the Temporary/Employment Wage Subsidy Scheme) and social transfers (including the Pandemic Unemployment Payment (PUP)). Intermediate consumption rose by €2.3bn, mostly due to extra spending by the health sector, while current transfers increased by €0.6bn (Table 4).

The table below is a preliminary estimate of the impact of COVID-19 on government expenditure. It is easy to see the impact of new measures, such as the PUP, while in other areas existing budgets were used (and supplemented) in order to deliver services. This table will be updated as more data becomes available from end-year accounts.

Data back to 1995 for all EU Member States are available on Eurostat’s database.

Compensation of employees (D.1): Continuing with the previous developments of processes and data sources, further amendments have been made to the compilation of the components of D.1 for General Government (2011-2020).

Depreciation (P.51c): Revisions have been made to the P.51c data due to the availability of additional data. These revisions are in line with the latest National Income and Expenditure Accounts published on 15 July 2021.

To date the provision of local authority housing was treated as a market output. This meant that the difference between the differential rent paid by the tenant and a market rent was calculated and included as P.11 (market output), with a corresponding imputed expenditure D.632 (social benefit in kind). However, Approved Housing Bodies (AHB) reclassified into the local government sector are considered as non-market producers, with no imputed rent calculation made.

On review, this approach was deemed not appropriate and thus a decision has been made to treat the local authority housing output as non-market. This ensures consistency with AHBs. This determination means that there is no longer an imputed D.632 expenditure related to local authority rent. Local authority rent payments are now recorded as P.131 (incidental sales and fees of non-market establishments). This methodology has been applied from 1995.

In addition to the direct expenditure measures included above earlier, other measures had an implicit impact on the GFS aggregates:

Other Transactions of note during 2020

Super dividend: In Q2 2020 the exchequer received a super dividend of €1,228 million from the Central Bank of Ireland.

Changes to the Register of Public Bodies.

The Register of public sector bodies (2020) was published in April and forms the basis for the general government sector. This update saw the inclusion of NAMA, the Insurance Compensation Fund and further approved housing bodies. Details were included in the background notes accompanying the April 2021 GFS Publication.

The GDP and GNI* figures used in the current publication are consistent with those published in the latest National Income and Expenditure Accounts 2020 on 15 July 2021.

This measure is by definition equal to both Total revenue (TR) less Total expenditure (TE) (Table 1), and Net acquisition of financial assets less Net incurrence of liabilities. In order to respect this accounting identity, a technical adjustment is made to the level of transactions recorded in liability category F32 (long-term debt securities) to eliminate any statistical discrepancy between the two approaches to the calculation of GG deficit/surplus. This adjustment has no impact on Gross debt, Net debt or Net worth.

Detailed codes and technical definitions can be seen in the ESA 2010 manual.

P.1 Total output of government is equal to market output, own account capital formation, and non-market output (i.e. the sum of D.1+P.2+P51c). The market output referred to in this publication is the imputed market value of social housing rented dwellings.

D.42 Dividends receivable by the owners of share equities. Dividends exclude "super dividends" which arise where the dividend paid is large relative to the recent level of dividends and earnings. Super dividends are recorded as withdrawal of equity (F.5). This arises, for example, in the case of dividends paid by the Central Bank.

Scan the QR code below to view this release online or go to
http://www.cso.ie/en/releasesandpublications/er/giea/governmentincomeandexpenditurejuly2021/