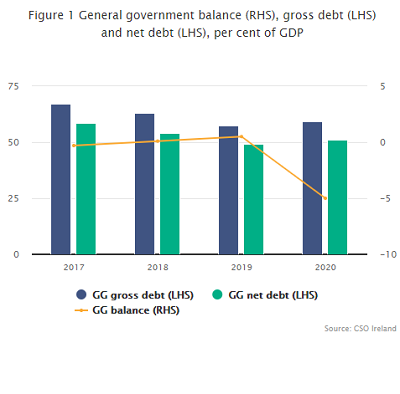 Government revenues were €3.5bn lower than in 2019. Overall tax revenues were down €2.5bn (a 3.9% drop on 2019), with a fall of 12.5% in indirect taxes, mainly due to reduced VAT receipts and the waiving of commercial rates, compared with a rise of 2.6% in direct taxes (including corporation tax and income taxes) (Table 3).

The significant increase of €16.7bn (19.1%) in government expenditure in 2020 is due to COVID-19 measures. There was a rise of €11.3bn in subsidies (including the Temporary/Employment Wage Subsidy Scheme) and social transfers (including the Pandemic Unemployment Payment (PUP). Intermediate consumption rose by €2.0bn, mostly due to extra spending by the health sector, while current transfers increased by €0.6bn (Table 4).

The table below is a preliminary estimate of the impact of COVID-19 on government expenditure. It is easy to see the impact of new measures, such as the PUP. Existing budgets were used (and supplemented) in order to deliver services in other areas. This table will be updated as more data becomes available from end-year accounts.

General government gross debt (the level of government borrowing) rose by almost €14bn to €218.2bn (Table 2).  However the debt to GDP ratio remained just below the Stability and Growth Pact threshold of 60% due to the performance of GDP in the year. Not all of the increase in government spending was funded by borrowing - cash balances were available to Government in 2020. These include NAMA, which transferred €2.0bn to the Exchequer, and €1.5bn from the National Surplus (Exceptional Contingencies) Reserve Fund. (The Fund was established in 2019 capitalised by €1.5bn from the Ireland Strategic Investment Fund).

The market value of liabilities rose by €20bn at the end of 2020 compared with one year earlier (Table 6). This was mainly due to the issuance of bonds in order to fund the COVID-19 related expenditure. Loan liabilities fell, mainly due to the repayment of three tranches (€1.9bn) of the UK bilateral loan in 2020. (Each tranche is £0.4bn and the last one repaid in March 2021).

Financial assets (at market value) decreased by €2.7bn in 2020. This was composed mainly of a decrease in the value of equity of €3.7bn and an increase in currency and deposits of €1.3bn.

General government net debt rose by €12.2bn to €187.7bn (51.2% of GDP) at the end of 2020. Net debt takes account of the assets corresponding to Excessive Deficit Procedure (EDP) debt instruments, i.e. currency and deposits, securities other than shares, and loans (Tables 2 and 7).

This release comprises the latest official publication by CSO of annual Government Finance Statistics (GFS) results for years 2015 to 2020.

The data published are consistent with the General Government Deficit and Debt levels reported at end-March 2021 under the EU regulation governing the Excessive Deficit Procedure (EDP). Consequently they may not always be fully aligned with the National Income and Expenditure and related publications such as the Institutional Sector Accounts.

Eurostat will publish deficit and debt levels for all EU member states on 22 April 2021.

The full suite of GFS tables are also available on the CSO website.

In addition to the direct expenditure measures included above earlier, other measures had an implicit impact on the GFS aggregates:

Other Transactions of note during 2020

Super dividend: In Q2 2020 the exchequer received a super dividend of €1,228 million from the Central Bank of Ireland.

Changes to the Register of Public Bodies.

The inclusion of these AHBs into S.13 means that their income, expenditure, assets and liabilities are added to general government. However, any income received from local and central government subsectors has to be consolidated. Likewise, expenditure which has a counterparty in local or central government has been consolidated as appropriate. Only additional income from other sectors of the economy has been added to government income (e.g. receipt of rent from tenants). The main additional expenditure relates to the compensation of employees, intermediate consumption and capital formation.

The impact of the reclassification is included in the time series beginning in 2014 (aligning with ESA 2010 implementation).

A review of the Insurance Compensation Fund (ICF) by Government Accounts Classifications concluded that the ICF should be included in central government sector (S.1311) from 2014 (aligning with ESA 2010 implementation). This has been implemented for the March 2021 EDP notification. The ICF will be listed as an Extra Budgetary Fund under the Department of Finance in the Register of Public Bodies 2020.

In Q2 2020, NAMA repaid the private shareholders and the State’s ownership in the special purpose vehicle that owns the NAMA group entities increased to 100%. As a result NAMA was automatically reclassified into the general government sector.

The transfer of €2.0 billion to the Exchequer took place after the private shareholders were redeemed and therefore had no impact on the GFS aggregates.

At the end of 2020 the value of the State's assets in Equity and Investment Fund Shares (AF.5, Table 6) stood at €33.7 billion, representing a year-on-year fall of €3.7 billion since Q4 2019. This drop in value was driven by the combination of a reduction in holdings in this asset class of €1.3 billion (Table 5) and a loss in value of these holdings of €2.4 billion, which related mostly to the market value of shares held by the State in Irish banks (Tables 5 and 6).

On the other side of the balance sheet the market value of the State's liabilities grew by 8.2% in 2020 to stand at €266.0 billion at year-end. Borrowing of €15.0 billion (Table 5) through the issuance of bonds to fund Covid-related expenditure was the primary driver of this increase in liabilities. The main offsetting movement was a reduction in loan liabilities (Table 6) that was largely due to further repayments on the UK bilateral loan.

The memo item, ‘estimated pension liabilities of government’ (Tables 2 and 6), has been updated to reflect the data in the supplementary table on the accrued-to-date pension entitlements in social insurance (Table 29) transmitted to Eurostat in December 2020 with reference to 2018 data, see Estimates of Irish Pension Liabilities 2018 published in February 2021. These estimates are compiled every three years in line with Eurostat requirements (Regulation (EU) No 549/2013). By their nature, they are therefore point-in-time estimates. The main difference between these latest estimates and the previous estimates is the discount rate used. The discount rate used for the previous 2015 estimates was 5% in nominal terms (3% in real terms). For the 2018 data, a discount rate of 4% nominal (2% real) was used. The discount rate has a significant impact on the scale of the pension liability and for this reason the data in respect of 2018 is not directly comparable with data in the 2015 publication.

European GFS, including EDP statistics, are produced according to the legally binding accounting rules of the European System of Accounts (ESA2010). The Manual on Government Debt and Deficit (MGDD) provides further guidance on the implementation of ESA2010 in the context of GFS.

General government balance is the standard European measure of the fiscal balance, which is used to monitor compliance with the Stability and Growth Pact.

Scan the QR code below to view this release online or go to
http://www.cso.ie/en/releasesandpublications/er/gfsa/governmentfinancestatisticsapril2021/