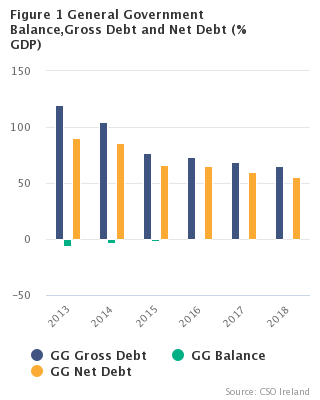 On the assets side of the State’s balance-sheet, financial assets rose by €13.2 billion during 2018. This increase was principally caused by a €15.7 billion rise in Other accounts receivable, with a lesser rise of €4.3 billion in Currency and deposits which was mostly caused by the issuance of new debt in the year. These rises in asset values were offset mainly by a fall of €5.6 billion in Equity and Investment Fund Shares.  This drop was mostly as a result of a loss in value of the State’s investment in Irish banks.  On the liability side of the balance-sheet, Total liabilities at market value grew by €15.9 billion, largely caused by an increase in Other accounts payable of €14.8 billion in the year to end-2018 (Table 6).

This release comprises the latest official publication by CSO of annual Government Finance Statistics (GFS) results for years 2013 to 2018.  The data in this release are subject to the normal verification process by Eurostat until 22 April 2019 and are therefore provisional.

The data published are consistent with the General Government Deficit and Debt levels reported at end-March 2019 under the EU regulation governing the Excessive Deficit Procedure (EDP).  Consequently they may not always be fully aligned with the National Income and Expenditure and related publications such as the Institutional Sector Accounts.

The official publication by Eurostat of deficit and debt levels for all EU member states is due on 23 April 2019.

The full suite of GFS tables are also available on the CSO website here .

Data for all EU Member States are available on Eurostat’s database here .

The latest sale of UMTS licenses in 2017 for the 3.6GHz band is included in the data published in this release.  This data has been processed in the same manner as earlier sales, see Background notes of October 2017 release here for further detail on the methodology.

The Eircom No. 2 and Coillte No. 2 pension funds were reclassified retroactively in the sector of general government (S.13) for this publication. This decision was verified by Eurostat at an EDP dialogue visit in February 2019.

Data on the value of this fund and payments from this fund are only available from 2011 and currently up to 2017.  For the years 1999 to 2010, transfer payments have been estimated based on the original asset value of the fund and the asset value at end 2011.  Transfer payments (D.62) from government (S.13) have increased and have decreased by a corresponding amount for the financial sector (S.12). The government (S.13) financial account shows corresponding F.2 flows in cash and reduction in AF.2 with the reverse reflected in the financial accounts of S.12.  For the years 2011 to 2017, more detailed data is used as the estimate of D.62 pension payments.  The financial accounts reflects these payments and imputes Other Economic Flows based on the change of the value of assets for this fund from the beginning of the year and the end of the year and the cash payments made during the year.

Data for 2018 has been estimated based on the previous year’s values and will be up-dated once updated 2018 data is available.  This fund is due to run out in 2020 or 2021 at which point the Minister for Finance will take responsibility for the payment of pensioners.

Coillte No. 2 fund was established in 1989 upon the establishment of Coillte.  Data on payments from this fund and receipts of this fund from 2008 to 2017 are available from Coillte’s annual financial reports.  This data was used to estimate transfer payments (D.62) to pensions and actual household contributions (D.6113) payments from households to the fund (i.e. re-routed to households).  The D.6113 payments also include the employer contributions to this fund.

Data for the years 1989 to 2007 have been trended based on average year-on-year change for the years for which data is available.  Thus the D.62 payments and D.6113 receipts of government (S.13) have increased with corresponding decreases in these transactions for the financial sector (S.12).  On the financial accounts, cash flows (F.2) and stock of cash (AF.2) for both the government (S.13) and financial sector (S.12) have corresponding adjustments.

This fund is due to run out in 2019 at which point the Minister for Finance will take responsibility for the payment of pensioners.

As of March 2018, 14 Approved Housing Bodies (AHBs) have been reclassified to the local government sub-sector (S.1313) from the Non-Profit Institution Serving Households Sector (S.15). In addition the housing activities of another non-profit organisation have been re-routed to the local government sub-sector. Details on the reclassification can be found here .

In 2018 Q2 the exchequer received a super dividend of €1,426 million from the Central Bank of Ireland.

In 2013 the payment by the Exchequer of €1.1 billion to meet obligations to IBRC deposit holders under the guarantee schemes in operation was treated as the granting of a loan from the Exchequer to IBRC, on the understanding that the Exchequer would be treated as a creditor of IBRC in the liquidation process and that there was a reasonable expectation of repayment.  The 2018 re-payment of €340.7 million was made in 2018 Q4.

In June 2018 there was a settlement made following a court process with medical consultants in relation to pay arrears.  The backdated payments of €213 million were recorded as D.99 expenditure of central government in Q2 2018.

There were large transactions in F.8 assets and liabilities in Q3 2018 of +€10.2 billion and +€9.7 billion respectively. In ESA terms, F.8 corresponds to other accounts receivable or payable. These assets and liabilities are created in situations where there is a timing difference between the underlying transactions and the corresponding payments.

The most significant development in the balance-sheet during 2018 related to the value of the State’s investment portfolio. In net terms the State ran down its holdings of Equity and Investment Fund Shares by €1.2 billion (Table 5), while the value of this element of its portfolio fell by €5.6 billion (Table 6). Excluding net transactions, the change in value is predominantly explained by the losses incurred on the shares held in Irish banks.

Estimates of the general government deficit have been revised since October 2018. The changes reflect the re-classification of Eircom and Coillte pensions and UMTS sales.  Changes to recent years also reflect the availability of more up-to-date and detailed data sources.

Estimates of the general government debt have been revised since October 2018. Revisions are due to improved compilation processes and, in recent years, also reflect the availability of more up-to-date and detailed data sources.

The GDP figures used in this publication are consistent with those published in the Quarterly National Accounts on 14 March 2019.

GNI* for 2018 will not be available until mid-2019, hence no 2018 GNI* comparisons are shown in this release.  These will be shown in the annual GIE release mid-2019 and the October annual release.

Scan the QR code below to view this release online or go to
http://www.cso.ie/en/releasesandpublications/er/gfsa/governmentfinancestatisticsapril2019/