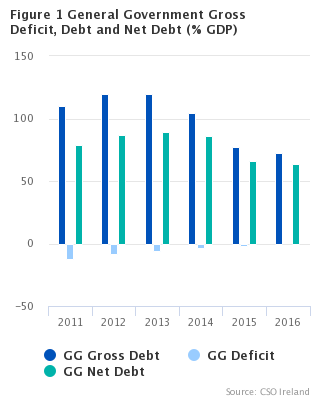 There was a reduction in all categories of GG Debt, except that of Currency and deposits (F2) and Short term debt securities (F31). On the financial assets side, reductions in all categories of assets were observed, except Other accounts receivable/payable (F8) (Table 6).  At the end of 2016 general government net debt increased by €3.1 billion to €175.6 billion (63.7% of GDP).  This increase was composed of a €1 billion reduction in GG Debt and a fall of €4.1 billion in cash deposits and debt security assets over the same period (Tables 2 and 7).

This release comprises the latest official publication by CSO of annual Government Finance Statistics (GFS) results for years 2011 to 2016.  The data in this release are subject to the normal verification process by Eurostat until 23 October 2017 and are therefore provisional.

The full suite of GFS tables are available on the CSO’s website by following the link:

The data published in this series are consistent with the General Government Deficit and Debt levels reported at end-September 2017 under the EU regulation governing the Excessive Deficit Procedure (EDP).  Consequently they may not always be fully aligned with the National Income and Expenditure and related publications such as the Institutional Sector Accounts.

The official publication by Eurostat of deficit and debt levels for all EU member states is due on 23 October 2017.

On 27 March 2017 Eurostat published a Guidance Note on the treatment of mobile phone licences, exploration rights and other licences on the recording of revenues arising from the sale of licences by government see - http://ec.europa.eu/eurostat/documents/1015035/7959867/Mobile-phone-licences-exploration-rights-and-other-licences.pdf.

This clarifies the rules for whether sales of licences by government for use of natural resources (e.g. use of the electromagnetic spectrum for mobile phone transmissions) should be treated as the direct sale of an asset, resulting in a once-off revenue or as the rent of an asset over a prolonged period resulting in a series of revenue over the period of the licence.

The CSO have amended the treatment of past sales of mobile phone licences to bring these in line with the March 2017 guidance note on the treatment of the sales of UMTS licences in 2002, 2007 and 2013.  The transactions in question are no longer treated as disposals of non-produced assets but as payments for rent of natural resources by the relevant operators over the period of the licence.  Under this treatment the deficit benefit accruing from the transaction is spread over the period of the licence rather than entering the accounts in the year of the transaction.  Up front lump sum payments are treated as a prepayment, and enter the balance sheet of government as a liability under “accounts payable” and are unwound over the period of the licence.

The changes in key revenue and expenditure aggregates following this revised treatment are as follows:

The general government debt (GG Debt) of Ireland includes borrowings from the European Financial Stability Facility (EFSF). The terms of the agreement establishing the EFSF were that it was a facility to make loans to euro area Member States and to finance such loans by issuing or entering into funding instruments backed by guarantees.  The financing was made available in the context of the financial crisis as a facility for Member States “in difficulties caused by exceptional circumstances beyond such Member States' control”.

The first of these loans to Ireland was drawn down in February 2011 and had an original maturity date of 18 July 2016.  In accordance with the arrangements for EFSF borrowing at that time, a pre-paid margin of €530 million was deducted from the loan amount on disbursement and held as a cash reserve, essentially as a form of security.

The total amount shown on the GG Debt for Ireland in relation to this loan was €4,194 million. This sum includes the full pre-paid margin of €530 million. There was also a counterbalancing asset in the amount of the margin shown in the accounts.

Following a decision of the relevant Heads of State and Government on 21 July 2011 the margin was no longer applicable to new loans, and the reimbursement of the prepaid margin plus interest earned over the period fell due to Ireland and the member state guarantors (€485 million and €45 million respectively) in proportion to the duration of the loan before and after 21 July 2011.  For Ireland, therefore, this reimbursement fell due on 18 July 2016 *. On this date a payment of €554.9 million was received.  This payment comprises the portion of the pre-paid margin due to the Exchequer (covering the period from 21 July 2011 onwards) plus interest income.

Following clarification from Eurostat the original margin of €530 million has been recorded as interest expenditure over the period of the loan (2011-2016) and the rebate of €554.9 million has been treated as one-off capital transfer revenue in 2016.  This treatment is specific to this particular loan and applies to all Member States involved in this type of borrowing from the EFSF. It does not apply to other loans drawn down from the EFSF or other programme funding accessed by Ireland during the financial crisis.  This treatment was applied in the April version of these figures and is unchanged in the current release.

The GDP figures used in this publication are consistent with those published in the National Income and Expenditure 2016 published on 14 July 2017.

Estimates of the general government deficit for years 2002 to 2016 have been revised since April 2017. The changes reflect the changes due to the revised methodology following the updated Eurostat guidance on the sale of licences along with changes in the estimation of financial intermediation services indirectly measured (FISIM).  Changes to recent years also reflect the availability of more up-to-date and detailed data sources.

Estimates of the general government debt have been revised since April 2017.  Revisions are due to improved compilation processes and, in recent years, also reflect the availability of more up-to-date and detailed data sources.

Scan the QR code below to view this release online or go to
http://www.cso.ie/en/releasesandpublications/er/gfsa/governmentfinancestatisticsoctober2017/