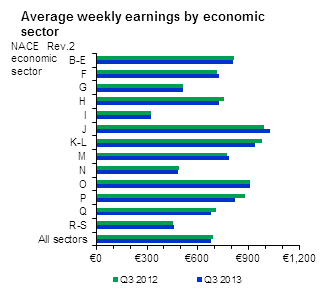 Other features of the preliminary results for Q3 2013 include:

The largest annual percentage increases in average weekly paid hours in Q3 2013 was recorded in the Construction and Public administration and defence sectors (both +3.2%).  The largest percentage decrease over the same period was seen in the Human health and social work sector (-2.0%) from 30.3 to 29.7 hours.

Overall decrease of 3.3% in average hourly total labour costs over the four years to Q3 2013

Table A1 contains estimates of public sector numbers by high level area within the overall public sector.   Public sector employment is spread across a number of NACE economic sectors and includes Semi-state bodies in sectors such as Transportation and storage and Information and communication. Furthermore, while employment in the Public administration and defence, Education and Human health and social work sectors is mainly in public sector organisations, there is some element of private sector employment too.

Show Table A1 Public sector numbers by sub-sector and quarter

Show Table A3 Response rates in selected sectors by quarter

The Earnings, Hours and Employment Costs Survey (EHECS) replaced the four-yearly Labour Cost Survey, and also replaced all other CSO short-term earnings inquiries. The EHECS results are comparable across sectors and include more detail on components of earnings and labour costs than was previously available.

The survey information was collected by the Central Statistics Office (CSO) under the S.I. No 314 of 2008 Statistics (Labour Costs Surveys) Order 2008.  The information collected is treated as strictly confidential in accordance with the Statistics Act 1993.  The survey results meet the requirements for Labour Costs statistics set out in Council Regulation (EC) 530/1999.

The CSO’s Business Register provides the register of relevant enterprises for the survey. An enterprise is defined as the smallest legally independent unit.

The business classification used for the EHECS is based on the Statistical Classification of Economic Activities in the European Community (NACE Rev.2). The NACE code of each enterprise included in the survey was determined from the predominant activity of the enterprise, based on information provided in this or other CSO inquiries.

NACE Rev.2 is the latest classification system for economic activities, updated from NACE Rev 1.1. A major revision of NACE was conducted between 2000 and 2007, in order to ensure that the NACE classification system remained relevant for the economy.  The main changes that affected the release was the reclassification of some industrial enterprises from industry to services (principally in the software and publishing sectors) and the inclusion of air conditioning supply, sewerage, water management and remediation activities in industry.

All enterprises with 50 or more employees and a sample of those with 3 to 49 employees are surveyed each quarter. The sample is based on the proportion of companies in each NACE 2 digit economic sectors in the 3 to 49 size classes (3 to 9, 10 to 19 and 20 to 49).

Earnings in the public sector are calculated before the deduction of the pension levy that was introduced in March 2009.

For Q1 and Q2 2011 temporary census field staff are included in all tables due to the large numbers involved.  Table A1 in the Annex provides employment details exclusive of these staff.

The survey is conducted by post and questionnaires are issued in the last week of the relevant quarter. Some returns are received electronically. All returns are scrutinised for accuracy. Where appropriate, firms are queried by post or telephone regarding incompleteness, apparent inconsistencies, etc. Information about the survey is on the CSO website and all questionnaires and instructions are available electronically there.

The EHECS is not directly comparable with other discontinued short-term earnings surveys such as the Quarterly Industrial Inquiry (QII), the Quarterly Services Inquiry (QSI) and the Quarterly Earnings and Hours worked in Construction (QEC).  The main differences are:

The EHECS collects data on the entire reference quarter while the QII, QSI and QEC only collected data for a reference week in the quarter.

All full-time or part-time workers paid a specific wage or salary or who had a contract of employment are defined as employees.   Persons not working for salary e.g. family members, directors, partners, outside pieceworker’s etc., are not considered employees but other persons engaged.  These workers are included separately but not used in the calculation of derived variables.  All employment figures are rounded to the nearest hundred.

Apprentices are defined as those whose wages/salaries are governed by the fact that they work either under an apprenticeship contract or as part of a training program.  They are included in the calculation of earnings and hours data.  They were also combined with full-time and part-time employees in determining the size group to which enterprises were classified.

Category of employees  by occupation

For some enterprises information was collected separately for three occupational groups. The three groups are:

The following are the other categories of labour costs:

These are amounts received by firms under the various state schemes (IDA employment incentive scheme, grants etc.) as well as refunds from the Department of Social Protection (DSP) for sick and maternity leave.  These are deducted from the firms’ labour costs in the analysis.

The National Minimum Wage Act 2000 became law on the 1st April 2000. Enterprises are asked to indicate the number of employees in receipt of the NMW at the end of each quarter.  A detailed guide to the Act is available from the Department of Jobs, Enterprise and Innovation at www.djei.ie. Employees earning less than the minimum wage due to age or training status are also included.  These rates do not apply to close relatives of the employer or apprentices other than apprentice hairdressers.

Total irregular earnings in the quarter divided by total paid hours for the quarter.

Annualised results for years 2008 – 2012 are available as a separate release, details of which are available on the CSO website. LINK

Methodology for production of final results
All enterprises with 50 or more employees are surveyed as well as a sample of enterprises which have between 3 and 49 employees inclusive. The classifications by size of enterprise are based on total persons engaged on the first day of the quarter.
Weighting

For enterprises with 3 to 49 employees inclusive, a weighting factor (the reciprocal of the sampling fraction) is used to weight the estimates to the total population for both employees and enterprises. The CSO Business Register forms the basis of the sampling frame used for weighting the sample data to the population.  Decay factors are calculated for each size class and sector to adjust the non-sampled element of the register for the respondent non-relevant enterprises.

Imputation is carried out for non-respondents in the greater than 50 employees’ categories. Where an enterprise responded in the previous quarter ratio-imputation is used to estimate figures for the current quarter while for enterprises that did not respond in the previous quarter a stratum average imputation method is used to estimate the missing variables. These estimates are based on respondent enterprises of a similar size and activity.

After imputation, all enterprises with 50 or more employees are accounted for and included in the final dataset.  For those cells where a sample survey of enterprises is used (enterprises employing between 3 and 49 employees), the results are expanded using the grossing factors to cover the entire population for the relevant industries in the quarter.  Macro edits are carried out at this stage and any outliers are investigated and corrected. Coherence of the data is ensured by scrutinising quarter on quarter changes.

The series presented in this release and all estimates deriving from the EHECS survey are primarily of use as an indicator of trends in average earnings and paid hours of employees across different classifications. However, in interpreting the trends and in undertaking direct comparison of the average level of earnings of different groups of employees or sectors some caution in interpretation is warranted.


In the case of trends, changes in the composition of employees in a given sector or group has an effect on the average levels of earnings and paid hours over time. For example if the proportion of part time employees increases within a sector then it would be expected that the average weekly earnings and paid hours would fall in that sector even if hourly pay rates were unchanged.

Public Sector Employment
There are two CSO surveys which can potentially provide information on public sector employment. The Quarterly National Household Survey (QNHS) can provide estimates based on all respondents who are in employment being asked whether they work in the public sector or not. The EHECS, which is the source of the quarterly Earnings and Labour Costs data, provides estimates based on responses from the employer. Specifically in the case of EHECS there is a response level of close to 80% for public sector employers over time.


Results are derived by utilising a matched sample of enterprises between consecutive quarters to generate quarterly changes.  An estimated series is included in Annex table A2.  The analysis conducted on these estimates revealed that volatility in the quarterly changes at individual NACE sectors means that it is only possible to produce reliable estimates when the sectors are grouped. Earnings for the broad occupational groups are therefore presented by the following amalgamations:-

Review of preliminary versus final data
An annual review of preliminary estimates and final data has been undertaken to ascertain the extent of change between both sets of results.  The review focused on response rates, scale of revision at NACE sectoral level and significant changes in trends.  The findings of the review indicate that the preliminary figures can be accepted as a suitable indicator for quarterly trends. Analysis of the results for individual NACE sectors highlighted that the change from preliminary to final data was broadly in the range of plus or minus 5%. However, as response rates can impact on the quality of data at the sectoral level, it is advisable to be aware of this when interpreting preliminary results.


Annex table A4 contains the differences between preliminary and final data for the most recent reported quarter, while Annex table A3 highlights response rates.  A review of the continued validity of preliminary estimates in this survey will be undertaken annually.

•       Semi State, both commercial and non-commercial

Scan the QR code below to view this release online or go to
http://www.cso.ie/en/releasesandpublications/er/elcq/earningsandlabourcostsq22013finalq32013preliminaryestimates/