Prices remain unchanged in the year to December 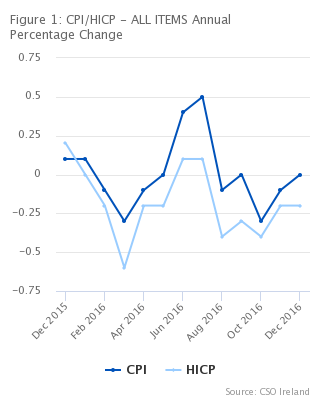 Prices on average, as measured by the CPI, remained unchanged in December compared with December 2015.

Consumer Prices in December, as measured by the CPI, remained unchanged in the month.  During December of last year, prices fell by 0.1% in the month.  The most significant monthly price changes were decreases in Alcoholic Beverages & Tobacco (-1.9%) and Clothing & Footwear (-1.4%).  There were increases in Housing, Water, Electricity, Gas & Other Fuels (+0.5%) and Transport (+0.4%).

The divisions which caused the largest downward contribution to the CPI in the year were Food & Non-Alcoholic Beverages (-0.31%), Furnishings, Household Equipment & Routine Household Maintenance (-0.23%) and Clothing & Footwear (-0.17%).

The divisions which caused the largest upward contribution to the CPI in the year were Restaurants & Hotels (+0.33%), Miscellaneous Goods & Services (+0.26%) and Housing, Water, Electricity, Gas & Other Fuels (+0.13%).

The sub index for Services rose by 1.9% in the year to December, while Goods decreased by 2.7%.  Services, excluding mortgage interest repayments, increased by 2.3% in the year since December 2015.

Prices on average, as measured by the EU Harmonised Index of Consumer Prices (HICP), decreased by 0.2% compared with December 2015.

The HICP decreased by 0.1% in the month.  This compares to a decrease of 0.1% recorded in December of last year.

The most significant monthly price changes were decreases in Alcoholic Beverages & Tobacco (-1.9%) and Clothing & Footwear (-1.4%).  There were increases in Housing, Water, Electricity, Gas & Other Fuels (+0.7%) and Transport (+0.4%).

Annual average inflation in 2016 was unchanged

The largest year-on-year price increase was recorded in July 2016 when prices rose by 0.5%.  Increases were also recorded for January and June 2016.  There were six months where the year-on-year price changes were negative while prices remained unchanged for three months.

Approximately 53,000 prices are collected for a representative basket consisting of 634 item headings in a fixed panel of retail and service outlets throughout the country during the week containing the second Tuesday of each month up to and including the third Tuesday of each month.  The dates to which the December index relates are Monday, 12th to Tuesday, 20th December 2016.

A full methodological description of the new series is available in the CPI - Introduction of Updated Series (Base December 2011=100) (PDF 306KB) ‌ which is published on the CSO website.

For a full discussion on the rationale and methodology for introducing water supply and sewage collecion charges into the CPI/HICP, see the relevant Introduction of Water Supply and Sewage Collection (PDF 593KB)

Scan the QR code below to view this release online or go to
http://www.cso.ie/en/releasesandpublications/er/cpi/consumerpriceindexdecember2016/