Births and deaths fall in 2014 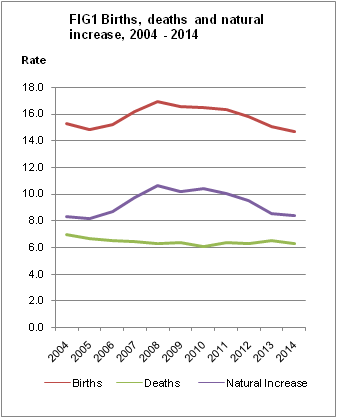 There were 249 infant deaths registered giving an infant mortality rate of 3.7 per 1,000 live births.

The leading cause of death in 2014 varied widely by age group.  Among young adults aged 15 to 44, external causes of death including accidents, suicide and other ranked first (631 deaths).  Among individuals aged 45-84, cancers were the leading cause, while for those aged 85 and older, it was diseases of the heart and arteries.  See table 12 and fig 5.

The average (mean) time-lag between the date of death and the registration of death was 50 days while the median (mid-point in data) was 19 days in 2014.

A full scanned copy of our 1864 Annual report can be accessed on the CSO web-site using the following link:

Show Table 5 Number and percentage of births registered within and outside marriage/civil partnership, classified by age of mother, 2014

Show Table 6 Number and percentage of births registered within and outside marriage/civil partnership, classified by area of residence of mother, 2014

Show Table 7 Births registered, classified by area of residence and age of mother, 2014

Show Table 8 Births registered outside marriage/civil partnership, classified by area of residence and age of mother, 2014

Show Table 10 Deaths registered by county of residence of deceased, 2014

Show Table 11 Deaths registered by cause of death and county of residence of deceased, 2014

Show Table 12 Deaths registered classified by cause and age-group, 2014

Show Table 13 Male deaths registered classified by cause and age-group, 2014

Show Table 14 Female deaths registered classified by cause and age-group, 2014

Show Table 15 Infant and neonatal mortality by area of residence of deceased, 2014

Show Table 17 Divorce, Judicial Separation and Nullity applications received and granted by the courts in the year ending December 2014

Show Table B - Deaths which were registered on the authority of the Superintendent Registrars in 2014, classified by principal groups of causes, sex and year of occurrence

All figures in this report are classified by year of registration.

Births and deaths (where no inquest has been held) which have not been registered within one year of their occurrence can be registered only on the authority of the Superintendent Registrars.  The tables in the main body of this report exclude such births and deaths.  The Appendix to the report contains an analysis of late death registrations in 2014 and of some deaths where an inquest has been held.  The number of such deaths registered in 2014 was 532..

The fourth quarter and yearly summary for 2014 are available in separate electronic releases on the cso website http://www.cso.ie/en/releasesandpublications/birthsdeathsandmarriages/.  The quarterly releases (from Quarter 1, 2014) and the yearly summary of the four quarters 2014 onwards are no longer available in hard copy.

Scan the QR code below to view this release online or go to
http://www.cso.ie/en/releasesandpublications/ep/p-vsys/vitalstatisticsyearlysummary2014/