This release was compiled during the COVID-19 pandemic. For further information see Information Note - Impact of COVID-19 on Vital Statistics Quarter 1 2020 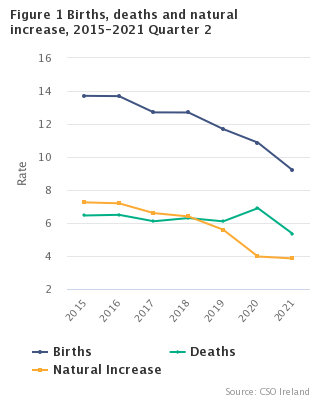 The number of births less the number of deaths in quarter 2 2021 resulted in a natural increase of population of 4,851 persons.

There were 7 babies born to mothers who were resident outside the Republic of Ireland in quarter 2 2021. This accounts for 0.06% of total live births registered in the quarter. See tables 5, 8, 9 and 10.

Deaths assigned an Underlying Cause of Death of External causes of injury and poisoning (including deaths from road traffic accidents and deaths from intentional self-harm), are likely to be underrepresented as such deaths are reported to the Coroner’s Office for further investigation. This can then result in such deaths being registered late (more than three months after the date of occurrence) and therefore have not yet been reported to the CSO. In addition, public hearings in the Coroner's Court have also been limited as a consequence of the restrictions imposed due to the COVID-19 pandemic and this may also have resulted in deaths being registered late.

It is important to note that there will be a number of deaths where COVID-19 will not be assigned as the Underlying Cause of Death (UCOD) and therefore, the COVID-19 deaths in this analysis, will vary from those put into the public domain by the Department of Health. This is because the figures published in the Vital Statistics quarterly releases are based on the narrative of cause of death that is reported, in electronic format, on the death certificate once the death is registered with the General Registration Office (GRO) and subsequently forwarded to the CSO for processing. All deaths that are registered are assigned an Underlying Cause of Death in line with the World Health Organization (WHO) International Statistical Classification of Diseases and Related Health Problems (ICD-10). This UCOD is assigned using the WHO selection rules and is dependent on the hierarchy of diseases or conditions and their placement on the medical death certificate. There are also instances where COVID-19 is mentioned in the narrative of the death certificate but where the UCOD is not COVID-19.

The leading cause of death in quarter 2 2021 varied widely by age-group. For those aged from 15 to 34 years, external causes of death including accidents, suicide and other ranked first (42 deaths). Among individuals aged 35-74, malignant neoplasms (cancer) was the leading cause (1,011), while for those aged 75 and older, it was diseases of the circulatory system (1,340 deaths). See table 14.

The average (mean) time-lag between the date of death and the registration of death was 64 days while the median (mid-point in data) was 40 days for quarter 2 2021.

Show Table 1 Births classified by age of mother at maternity by quarter, 2016, 2020 and 2021 and their corresponding annual age specific (asfr) and total period fertility rates (tpfr)

Show Table 2b Deaths registered by cause of death and age group, Second Quarter 2021

Show Table 7 Number and percentage of births registered within and outside marriage/civil partnership, classified by age of mother, April - June 2021

Show Table 8 Number and percentage of births registered within and outside marriage/civil partnership classified by area of residence of mother, April - June 2021

Show Table 13 Deaths registered by cause of death and county of residence of deceased, April - June 2021

(a) the disease or injury which initiated the train of morbid events leading directly to death, or (b) the circumstances of the accident or violence which produced the fatal injury’, and is selected for routine single-cause tabulation of mortality statistics.

Inquest deaths are coded manually due to the nature of the reporting of these cases.  The difficulty lies in automatically assigning a verdict from a broad range of verdicts open to a Coroner or jury which include accidental death, misadventure, suicide, open verdict, natural causes (if so found at inquest) and in certain circumstances, unlawful killing. A provisional cause of death may been assigned to a number of inquest cases pending the outcome of further enquiries.

Rates for quarter 2 2021, were calculated using the relevant population data in April 2021.

Stillbirth:  Stillbirth weighing 500 grams or more or at gestational age of 24 weeks or more, this definition applies to stillbirth figures from 1995 onwards.

Scan the QR code below to view this release online or go to
http://www.cso.ie/en/releasesandpublications/ep/p-vs/vitalstatisticssecondquarter2021/