Increase of 48.5% in new private cars licensed in March 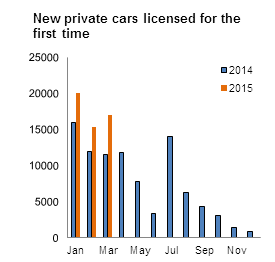 The vehicle licensing figures are compiled from data supplied by the Department of Transport, Tourism and Sport (DTTAS), Driver and Vehicle Computer Services Division. The data provide details on the number of private cars, goods vehicles, motor cycles and other vehicles licensed for the first time in each city and county council, classified by make and size, during a given month.

For new cars registered from 1 July 2008 motor tax charges are determined on the basis of the CO2 emission level, based on seven CO2 bands. Tables with CO2 emission data were added to this release from July 2008.

Scan the QR code below to view this release online or go to
http://www.cso.ie/en/releasesandpublications/er/vlftm/vehicleslicensedforthefirsttimemarch2015/