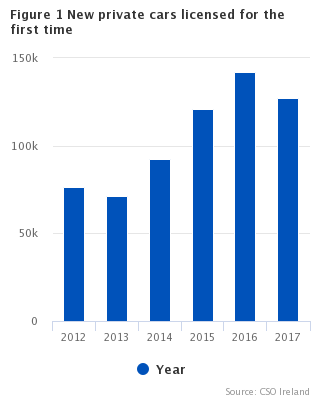 All but three counties (Cavan, Roscommon and Waterford) showed a decrease in the number of new cars licensed in 2017 compared with the previous year.  Almost half (48.3%) of all new private cars licensed in the country in 2017 were licensed in Dublin (36.4%) and Cork (12.0%) combined. See figure 2.

In December 2017, 601 new private cars were licensed for the first time, a decrease of 11.5% compared with December 2016. The number of used (imported) private cars licensed in December was virtually unchanged from the same month in the previous year.

In 2017, the colour of choice for most new Volkswagen, Toyota, Ford and Nissan private cars licensed was grey, while white was the most popular colour for newly licensed Hyundai cars. See table A.

Show Table 6: Number of vehicles licensed for the first time classified by taxation class and year

Show Table 7: Percentage of new private cars licensed for the first time by most popular colour, 2013 to 2017

Scan the QR code below to view this release online or go to
http://www.cso.ie/en/releasesandpublications/er/vlftm/vehicleslicensedforthefirsttimedecemberandyear2017/