Decrease of 17.4% in new private cars licensed in December 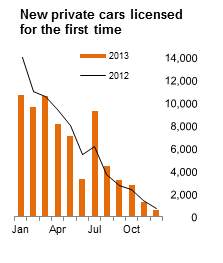 The licensing figures refer to vehicles taxed for road use only and classified by taxation class.

It should be noted that the three month transition period for motor tax gapping provided for in the Non-Use of Motor Vehicles Act 2013 ended on 30 September 2013.

For new cars registered from 1 July 2008 motor tax charges are determined on the basis of the CO2 emission level, based on seven CO2 bands.  Tables with CO2 emission data were added to this release from July 2008. A further such table was added in November 2008.

In practice, on a monthly basis, the licensing data is probably a better reflection of sales. In some cases, a vehicle may be registered by a dealership in advance of a sale. Whereas, typically, vehicles are only licensed at the point of sale.  However, if a vehicle is purchased towards the end of a month, the buyer may wish to defer collecting and licensing it until the start of the following month. So the issue is not clear-cut.

Scan the QR code below to view this release online or go to
http://www.cso.ie/en/releasesandpublications/er/vlftm/vehicleslicensedforthefirsttimedecember2013/