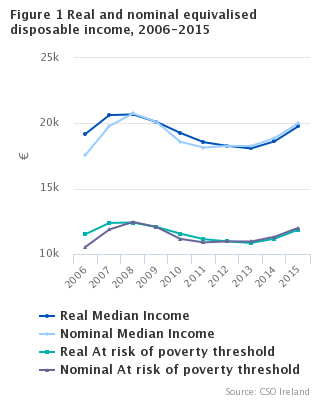 The Survey on Income and Living Conditions (SILC) in Ireland is a household survey covering a broad range of issues in relation to income and living conditions.  It is the official source of data on household and individual income and also provides a number of key national poverty indicators, such as the ‘at risk of poverty’ rate, the consistent poverty rate and rates of enforced deprivation.  This report presents the results for 2015 and comparable data for previous years.

* Real income figures are based on 2012 prices.

At risk of poverty

Impact of social transfers on the at risk of poverty rate

At an overall level in 2015, the prevalence of ten of the eleven types of deprivation either declined or remained stable when compared to 2014. However, there was a small increase in the numbers experiencing an inability to keep the home adequately warm in 2015. The most common types of deprivation experienced were an inability to replace worn out furniture (24.4%), afford a morning/afternoon/evening out (18.6%) and have family/friends over for a meal/drink (16.8%).

For those at risk of poverty, there was an increase in eight of the eleven types of deprivation.  There was a decrease in the numbers who had to go without heating at some stage during the year from 30.0% in 2014 to 27.9% in 2015. The types of deprivation most commonly experienced by those at risk of poverty were an inability to replace worn out furniture (43.6%), afford a morning/afternoon/evening out (38.9%) and have family/friends over for a meal/drink (34.9%).

For those not at risk of poverty, there was a decline in all eleven types of deprivation. The types of deprivation most commonly experienced by those not at risk of poverty were again an inability to replace worn out furniture (20.5%), afford a morning/afternoon/evening out (14.4%) and have family/friends over for a meal/drink (13.1%).   See table 7a.

An analysis of consistent poverty rates by region shows that the rate for the Border, Midlands and Western region was 9.9% compared with 8.3% for the Southern and Eastern region. See table 2.

Show Table 2 At risk of poverty, Deprivation and Consistent poverty rates by year

Show Table 6 The number of deprivation items experienced by year

Show Table 8 Profile of population at risk of poverty, experiencing deprivation and in consistent poverty by demographic characteristics

Show Table A1 Sample size by demographic characteristics and year

The primary focus of the Survey on Income and Living Conditions (SILC) is the collection of information on the income and living conditions of different types of households in Ireland, in order to derive indicators on poverty, deprivation and social exclusion.  It is a voluntary (for selected respondents) survey of private households.  It is carried out under EU legislation (Council Regulation No 1177/2003) and commenced in Ireland in June 2003.

Information is collected continuously throughout the year with household interviews being conducted on a weekly basis. The income reference period for SILC is the 12 months immediately prior to date of interview. Therefore, the income referenced spans the period from January 2014 to December 2015. In 2015, the achieved sample size was 5,452 households and 13,793 individuals.

For 2015, the  results of the SILC survey were published thirteen months after the end of the reference period and twelve months after the end of the data collection period.  It is important to take into account a number of factors when comparing the timeliness of the Irish results with those of other countries.  These factors include; the timing and duration of the data collection fieldwork and the exact reference year of the data collected. For example, some EU member states use income data from the previous year (T-1) as a proxy for current (T) annual income.  As noted above, the income referenced in Ireland’s 2015 SILC data spans the period from January 2014 to December 2015

In 2014, a new sampling methodology was introduced to improve the robustness of the SILC Sample.  However, as earlier waves of the sample introduced in  2012 and 2013 still exist, the new improved sample represents just over 74% of the overall achieved sample. The sample methodology takes into account response rates and attrition rates to ensure the CSO achieves the required effective sample size required by Eurostat.  The following is a brief overview of the revised SILC sample methodology:

A two-stage cluster sample design was used. This comprised of a first stage sample of 1,690 blocks (or small areas) selected at county level to proportionately represent eight strata reflecting population density. Each block was selected to contain, on average, 30 dwellings for SILC. The eight population density strata groups used were as follows:

The second stage of sampling involved the random selection of households for each block.

In accordance with Eurostat recommendation, CALMAR was used to calculate the household cross-sectional weights. Benchmark information was used to gross up the data to population estimates. The benchmark estimates were based on:

¨       Other households with children

Due to the “integrative” calibration method, the personal weight generated in CALMAR is equal to the household weight. Because there is no individual non-response within a household, the weights for personal cross-sectional respondents aged 16 and over are the same as the overall personal weight.

Estimates were calculated in SAS using the Jackknife and the Taylor Linearisation methodology.  For the mean equivalised net disposable income, the ‘At Risk of Poverty’ rate, the ‘Deprivation’ rate and the ‘Consistent Poverty’ rate, the Jackknife Method in PROC SURVEYMEANS was used. The Taylor Linearisation Method in PROC SURVEYMEANS was used to measure the precision of the quantiles.

SAS routines and macros were developed to calculate the precision of the more complex statistics, i.e. the Gini Coefficient and the Quintile Share Ratio (QSR), using the Jackknife Method.  The variance of the Gini and the QSR was estimated using the methodology outlined in Lohr1 Ch. 9 ( Variance Estimation in Complex Surveys).  The calculations of the precision estimates took into account the weighting,  the complex structure of the sample, (i.e. the fact that the sample was a cluster sample as opposed to a simple random sample) and other complications arising from the methods adopted.

The annual SILC survey is the main data source for SILC. Information is collected from all household members on laptop computers by trained interviewers, using Computer-Assisted Personal Interview (CAPI) software.

In addition, the CSO has two primary micro data sources.  These are the Department of Social Protection (DSP) social welfare data and Revenue Commissioners’ employee income data. The DSP’s INFOSYS system provides details of long-term social welfare schemes while details relating to short-term payments are provided in the DSP Integrated Short Term Schemes (ISTS) administrative records. The CSO continues to work with DSP and Revenue to ensure good quality data is available on a timely basis.

Unemployment related payments
Old-age payments (note that this includes all occupational pensions and other such social welfare payments to those aged 65 and over)
Family/children related allowances:

Equivalence scales are used to calculate the equivalised household size in a household.  Although there are numerous scales, we focus on the national scale in this release.  The national scale attributes a weight of 1 to the first adult, 0.66 to each subsequent adult (aged 14+ living in the household) and 0.33 to each child aged less than 14.  The weights for each household are then summed to calculate the equivalised household size.

Tenure status refers to the nature of the accommodation in which the household resides. The status is provided by the respondent during the interview and responses are classified into the following three categories:

From 2014 onwards due to the new sampling methodology, areas are now classified as Urban or Rural based on the following population densities derived from Census of Population 2011:

Prior to 2014, areas were classified as Urban or Rural based on the following population densities:

In the 2014 sample, wave 2-4 households retain this earlier urban-rural categorisation of households.

The regional classifications in this release are based on the NUTS (Nomenclature of Territorial Units) classification used by Eurostat. The NUTS3 regions correspond to the eight Regional Authorities established under the Local Government Act, 1991 (Regional Authorities) (Establishment) Order, 1993, which came into operation on 1 January 1994. The NUTS2 regions, which were proposed by Government and agreed by Eurostat in 1999, are groupings of the NUTS3 regions.

At risk of poverty rate

Households that are excluded and marginalised from consuming goods and services which are considered the norm for other people in society, due to an inability to afford them, are considered to be deprived. The identification of the marginalised or deprived is currently achieved on the basis of a set of eleven basic deprivation indicators:

Individuals who experience two or more of the eleven listed items are considered to be experiencing enforced deprivation. This is the basis for calculating the deprivation rate.

The consistent poverty measure looks at those persons who are defined as being at risk of poverty and experiencing enforced deprivation (experiencing two or more types of deprivation).

Relative at risk of poverty gap

At risk of poverty rate before social transfers

At risk of poverty rate anchored at a moment in time

For a given year, the “at risk of poverty rate anchored at a moment in time” is the share of the population whose income in a given year is below the at risk of poverty threshold calculated in the standard way for a previous base year and then adjusted for inflation.  The purpose of this indicator is to get some indication of the changes in ‘absolute poverty’ over time.  The deflator is derived from the monthly CPI and takes into account the rolling nature of the income data collected by SILC.

This is the relationship between cumulative shares of the population (ranked according to the level of income from lowest to highest) and the cumulative share of total income received by them, i.e. the Lorenz Curve.  If there was perfect equality (i.e. each person receives the same income) the Gini coefficient would be 0%.  A Gini coefficient of 100% would indicate there was total inequality and the entire national income was in the hands of one person.

Calculation of the Gini Coefficient

The Central Statistics Office wishes to thank the participating households for their co-operation in agreeing to take part in the SILC survey and for facilitating the collection of the relevant data.

Scan the QR code below to view this release online or go to
http://www.cso.ie/en/releasesandpublications/er/silc/surveyonincomeandlivingconditions2015/