This release has been compiled during the COVID-19 crisis. The results contained in this release reflect some of the social and economic impacts of the COVID-19 situation. For further information see Background Notes.

Social Impact of COVID-19 on Women and Men 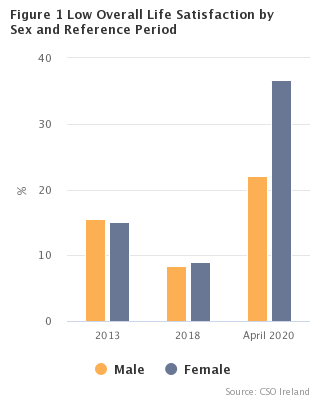 Results from the CSO’s Social Impact of COVID-19 survey, April 2020, were published on 8th May and provide an insight into the impact COVID-19 has had on people in Ireland. The survey covered topics such as well-being, personal concerns, consumption, working life and compliance with official COVID-19 advice. This publication presents results from the survey broken down by sex and illustrates how women and men have been impacted differently by COVID-19. Some main results include:

Evidence from recently published studies on mental health concerns related to COVID-19 suggests that symptoms of anxiety, depression and stress are common psychological reactions to the COVID-19 crisis (Rajkumar 2020).

Results from the Social Impact of COVID-19 survey show that well-being has been negatively affected since the onset of the COVID-19 crisis.  Respondents were asked to rate their satisfaction levels with various aspects of their lives (overall life satisfaction, satisfaction with the financial situation of their households, and satisfaction with personal relationships) on a scale from 0 (‘Not at all satisfied’) to 10 (‘Completely satisfied’).  Responses were grouped as Low (0-5), Medium (6-8), or High (9-10).  The well-being scores for male and female respondents are compared below with well-being statistics from 2018 and 2013, as collected by the Survey of Income and Living Conditions (SILC).

In both 2013 and 2018 over 5% of male respondents and 4% of female respondents rated their satisfaction with their personal relationships as Low, this has increased to 15.1% for males and 19.5% for females, in April 2020.

In April 2020, more than one in three (37.6%) female respondents had a Low satisfaction score for overall life, up from approximately one in ten females (9.2%) in 2018. The percentage of males reporting Low satisfaction rose from 8.5% to 23.0% in the same period.

In April 2020, male respondents were more likely to report feeling happy All or most of the time in the past four weeks, at 66% compared to 58.3% of women.

The CSO’s Employment and Life effects of COVID-19 release reported that women are more likely to report COVID-19 related childcare issues than men (9% compared to 6%). More women (21%) than men (15%) are caring for a dependent family member or friend because of the COVID-19 crisis and a higher percentage of women are finding it more difficult to work from home with family around than men (11% compared to 9%). This supports the idea that women in households with children who are working from home are feeling more nervous than their male counterparts, partly due to the additional responsibilities they undertake.

As a possible consequence of these additional commitments, the Social Impact of COVID-19 survey found that of those who are new to working from home, almost half (48.6%) of women reported that they would like to return to their place of work after COVID-19 restrictions have been lifted, this compares to less than one in three (31.7%) of male respondents.  This difference in preference of working arrangements may also be explained by the finding that the percentage of women Extremely concerned about maintain social ties was double the male rate (10.9% compared with 5.4%).

More women have increased their consumption of alcohol, tobacco and junk food than men

There is epidemiological evidence suggesting an association between psychological distress and changes in alcohol, tobacco and junk food consumption.  For further information see Harvard School of Medicine  (Why stress causes people to overeat), US National Library of Medicine (Psychological distress is associated with tobacco smoking and quitting behaviour in the Australian population: evidence from national cross-sectional surveys) and  US National Library of Medicine  (Association of alcohol use and loneliness frequency among middle-aged and older adult drinkers).

Results from the Social Impacts of COVID-19 survey show that female respondents had increased their consumption of alcohol, tobacco, junk food and sweets to a greater extent than men.

The Social Impacts of COVID-19 survey respondents were asked how, if at all, their behaviour in relation to each of the following had changed since the COVID-19 restrictions were introduced:

Respondents could answer “Increased”, “Decreased”, “No change” to the above and could also indicate that they did not partake in the behaviour.

The percentage of male and female respondents that said they consume tobacco was nearly identical, 25.9% and 26.0% respectively. Of those that consume tobacco, more than one third (34.7%) of women reported that their consumption of tobacco had Increased since COVID-19 restrictions compared to one in four (26.2%) men. Just over one in ten (10.2%) men said that their consumption had Decreased compared to one in fourteen (7.1%) women.

Purpose of the Survey and Reference Period

A questionnaire on the Social Impact of COVID-19 survey was conducted by the CSO between Thursday 23 April and Friday 1st May. Most individuals selected received a letter and/or an email from the CSO and were asked to complete the questionnaire online, while some were contacted via telephone. The questionnaire asked for information on the following topics:

The sample selection methodology resulted in a sample of 4,033 people. 3,033 of these were issued the questionnaire via email on Thursday 23rd April, while 500 were issued with letters requesting their participation in the online survey. A further 500 were scheduled to be contacted via CATI (Computer Assisted Telephone Interviewing). For the purposes of this analysis, data collection was closed on Friday 1st May 2020, at which point the achieved sample was 1,362 individuals.

Timeliness was a key priority in this survey and therefore the sample and subsequent weighting process is one of convenience to some extent. Some consideration needs to be given to the potential impact of sample design on response rates and achieved sample:

The weighting procedure outlined below was designed to adjust for possible bias in the achieved sample as much as possible.

The following weighting process was devised to counteract some of the potential bias within the sample, and to make the final weighted sample distribution as representative as possible of the population.

In the first stage of the weighting process, each person in the sample was given a weight of 1. We utilised the current LFS non-response adjustment process, in which a stepwise logistic regression was conducted based on census household-level data, to generate response propensities based upon the following characteristics:

The sample is then grouped into strata based on propensity score, for which non-response adjustments were calculated and applied to each respondent.

In stage 2, Q4 2019 LFS population estimates were used to benchmark the dataset across key characteristics for calibration. The non-response adjustments were inflated match overall the population total and then calibrated using CALMAR[1], to ensure that weighted sample totals matched the Q4 2019 benchmark totals for a number of key characteristics such as gender, age, education level, region, urban/rural location, household composition.

The Central Statistics Office wishes to thank the participants for their co-operation in agreeing to take part in the Social Impact of COVID-19 Survey and for facilitating the collection of the relevant data.

[1] CALMAR is the statistical software developed by INSEE. Calmar is a SAS macro program that implements the calibration approach and adjusts weights assigned to individuals using auxiliary variables.

Scan the QR code below to view this release online or go to
http://www.cso.ie/en/releasesandpublications/er/sic19wm/socialimpactofcovid-19onwomenandmenapril2020/