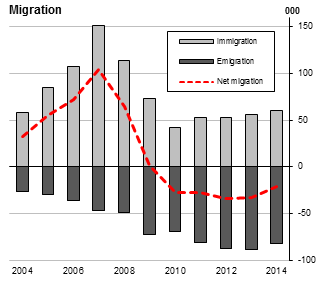 Irish nationals continue to experience net outward migration, although at a lower level than in the previous year, falling from 35,200 to 29,200, while net inward migration among non-Irish nationals grew for the second year in a row, from 2,100 to 7,900. (Table 2)

The combined effect of natural increase and negative net migration resulted in an overall increase in the population of 16,500 bringing the population estimate to 4.61 million in April 2014. (Table 1)

Other main features of the 2014 figures are:

Show Table 5 Estimated Migration (aged 15 and over) classified by Sex and Education Attainment, 2009 - 2014

This release provides for the first time estimates of immigration and emigration by educational attainment (Table 5) and principal economic status (Table 6), based on responses in the QNHS.

4. Actively looking for work after voluntary interruption of working life (for 12 months or more) for personal or domestic   reasons

As with all the breakdowns of migration (by age, nationality, origin and destination), the breakdown by educational attainment and principal economic status should be considered broadly indicative given the relatively small sample sizes associated with these flows. In addition, as a person’s principal economic status can change over the course of the year (and to a lesser extent their education attainment), for immigrants these two new tables refer to their status in the quarter prior to the April of the year in question, while for emigrants it is their status in the period prior departure.

Scan the QR code below to view this release online or go to
http://www.cso.ie/en/releasesandpublications/er/pme/populationandmigrationestimatesapril2014/