Agricultural operating surplus estimated to have increased by 0.3% in 2013 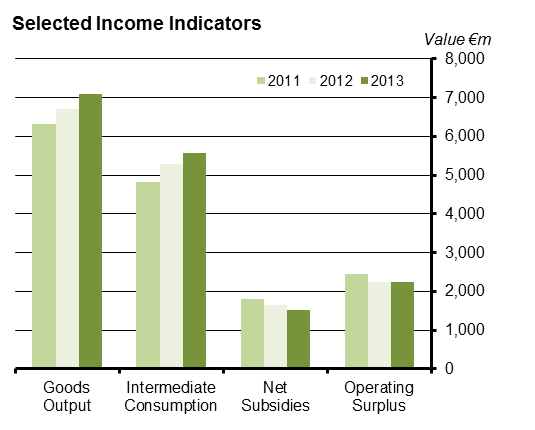 The CSO’s second estimate of operating surplus in agriculture in 2013 shows an annual increase of 0.3%.  This follows a decrease of  8.5% in 2012. The estimate for 2013 is based on the data currently available for the year.  See Table 1.

Comparison of 2013 with 2012 shows the following changes in estimated value:

This release updates the Advance Estimate of Output, Input and Income in Agriculture published by the CSO in December 2013.

Final estimates will be published in June 2014.

For each category, the difference between closing year stocks and opening yearstocks is valued at the average producer price for the year. The changes for cattle are obtained from DAFF’s Animal Identification and Movement (AIM) system (formerly known as the Cattle Movement Monitoring System (CMMS)). This system involves electronically recording data on animal movements.

This includes remuneration in cash and in kind.  It does not include the remuneration of work undertaken by the farmer or by non-salaried family farm members.

Scan the QR code below to view this release online or go to
http://www.cso.ie/en/releasesandpublications/er/oiiap/outputinputandincomeinagriculture-preliminaryestimate2013/