January-March accounted for 43% of residential gas consumption in 2016 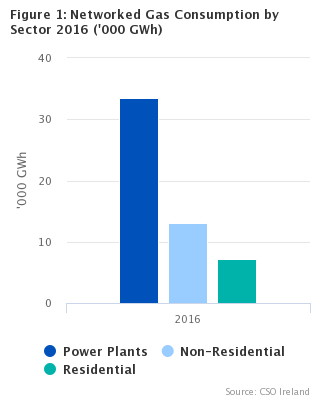 There is strong seasonal variation in networked gas consumption by households. The January to March quarter had by far the highest consumption varying from 53% of total residential usage in 2011 to 43% in 2016. In contrast July to September accounted for only 6% of total residential consumption in 2016 (see Headline Table and Table 2D). Consumption was less seasonal in other sectors with the third quarter of 2016 accounting for 27% of total usage by power plants and for 20% in the non-residential sector (see Tables 2B and 2C).

Power plants accounted for 62% of total networked gas consumption in 2016 compared with 24% by the non-residential sector and 13% by the residential sector (see Table 1 and Figure 1). This pattern was broadly similar in 2011 to 2015.

Table 4B shows the corresponding table for individual Dublin postal districts. Dublin 15, at 353 Gigawatt hours, had the highest residential consumption in 2016 followed by Dublin 24 with 220 GWh. 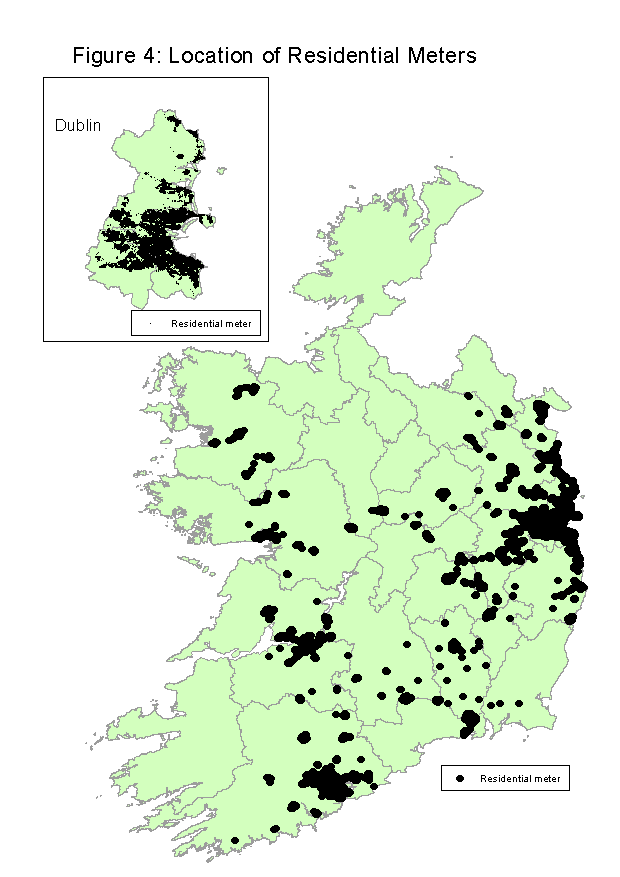 This release contains consumption data from Gas Networks Ireland on all connections to the mains gas network.

The CSO extracted the county and Dublin postal district from the postal address provided by Gas Networks Ireland. Additional work was required to identify a county for the largest non-residential customers as these were provided in a separate monthly file that did not contain the customer's address. There was a very small number of dwellings connected to the gas network in Wexford in 2016. The figures for Wexford should not be regarded as covering the full year. Accordingly we have excluded Wexford from Figure 3.

The data cover all consumers connected to the natural gas network. This includes power plants, non-residential, and residential customers. Five counties (Donegal, Kerry, Leitrim, Longford, and Sligo) had no meter connections. The 2016 Census of Population showed that there were around two million households in Ireland of which 1.7 million were occupied. This release showed that there were around 660,000 residential gas meters in 2016. The release contains a map showing the location of the residential meters using the coordinates provided by Gas Networks Ireland (see Figure 4).

The meter readings data were converted to monthly and quarterly consumption estimates by Gas Networks Ireland. Meter readings can be actual or estimated. In some cases an estimated reading that was too high resulted in a low or negative reading for a subsequent period, i.e. no attempt was made to adjust the earlier over or under estimate. The data file provided to the CSO did not provide information on whether the consumption in a period was based on an estimated reading. The results are broadly consistent with Gas Network Ireland reports and with the Sustainable Energy Authority of Ireland energy balances.

The median can be regarded as typical usage as it is not influenced by outliers in the same way that the mean or average is. The median for a year is calculated independently of the quarterly medians, e.g. in Table 5A.

This release will be published on an annual basis.

There are around 29,000 non-residential customers. The CSO will try to add NACE codes to these records, as NACE would provide a more detailed analysis of the non-domestic customers.

Scan the QR code below to view this release online or go to
http://www.cso.ie/en/releasesandpublications/er/ngc/networkedgasconsumption2016/