Number of new dwelling completions up 34.1% in year 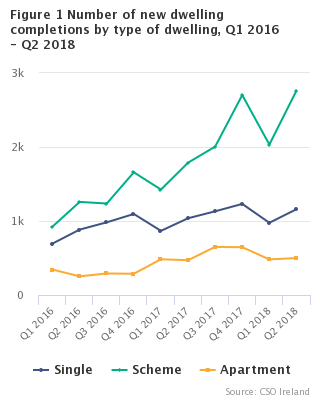 The ESB domestic connections dataset provides information on the type of connection and whether it is in an urban or rural area. Figure 2 below shows that in Q2 2018, more than three quarters of all new dwelling completions (78%) are urban with 22% being in rural areas. See Table 2.

The number of new dwelling completions was highest in Dublin at 1,804 followed by the Mid-East at 870 completions. These two regions combined also accounted for three quarters of all scheme dwellings completed in Q2 2018. Apart from Dublin, counties Meath, Kildare and Cork record more than 200 new scheme dwellings each in Q2 2018. The South-West was the region with the most single dwellings completed, led by county Cork where 175 new single dwellings were completed. There were 323 new apartments completed in Dublin which accounted for 65% of all new apartments in Q2 2018. See Table 3.

'Dublin 15' the Eircode area with the most new dwelling completions

Domestic ESB connections in Q2 2018 totalled 5,460, an increase of 19.6% on Q2 2017. The ESB domestic connections series shows a comparable trend to the NDC series compiled by the CSO as shown in Figure 4. However, there is a significant difference in volume between the two series. The starting point for the NDC series is the ESB domestic connections dataset, with adjustments made to account for previously finished houses in unfinished housing developments (UFHDs), reconnections and non-dwellings as shown in Figure 5 and Table 4.

The number of previously finished dwellings in unfinished housing developments (UFHDs) dropped from 315 in Q2 2017 to 185 in Q2 2018, a decline of 41.3%. From the peak in Q3 2014 when 716 UFHDs were connected to the ESB Network, UFHDs have decreased by 74.2%. A property which is reconnected to the ESB network after having been disconnected for more than two years, is assigned a new MPRN and is therefore included in the ESB connections datasets. These reconnections decreased by 15.3% to stand at 613 in Q2 2018. The number of non-dwellings has increased slightly by 4.7%. See Figure 5 and Table 4.

Table 5 shows the type of ESB connection by NUTS3 region. Border (99) and West (105) regions show the highest number of reconnections. In Q2 2018, there are no UFHDs in Dublin and the Mid-East shows the highest number of UFHDs at 36. Dublin and Mid-East combined make up 60.5% of all new dwelling completions in Q2 2018. Non-dwellings are highest in the South-West (63) and the Mid-West (41).

Historically, the number of new dwellings built in Ireland, as published by the DHPLG, was based on the number of connections to the ESB Network. However, in recent years it became apparent that this series was overestimating the levels of new dwelling construction in Ireland. The New Dwelling Completions series will look to replace this and other available indicators of housing activity in Ireland. This series will include information on dwelling type, urban/rural location, activity by county and by Eircode Routing Key. It will continue to be based on domestic ESB connections but will correct for over-coverage by using additional information from ESB Networks and incorporating data from other sources. It also includes data on the number of reconnections and on houses from unfinished housing developments that are coming back into use. This will provide policy-makers with a valuable insight into the number of new dwellings available for occupation in the quarterly period concerned and also show data on the numbers of dwellings being constructed.

The New Dwelling Completions data series is based on the number of new dwellings connected by the ESB Network to the electricity supply and may not accord precisely with county or Eircode Routing Key boundaries. The NDC series is split into counties and Eircode Routing Keys based on the information of the substation rather than the exact location of the dwelling. As Eircode becomes available as the unique identifier, it will replace the source of identifying the location of a new dwelling.

The breakdown of ESB connections by type of connection and dwelling is based on NUTS 3 regions as described below:

The dwelling type (single, scheme, apartment) and urban-rural divide is defined by the ESB Network.

Scan the QR code below to view this release online or go to
http://www.cso.ie/en/releasesandpublications/er/ndc/newdwellingcompletionsq22018/