Quarterly increase of 0.9 per cent in Real GDP 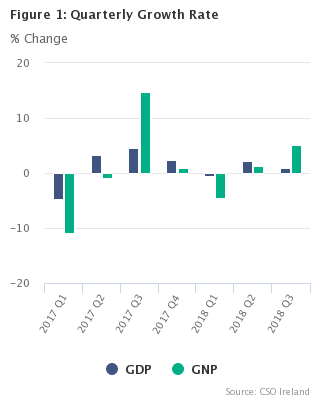 On a seasonally adjusted basis, initial estimates indicate that GDP in volume terms increased by 0.9 per cent for the third quarter of 2018. Real GNP increased by 5.2 per cent over the same period.

Value added increases for all Industrial and Service sectors

Initial estimates for the third quarter of 2018 indicate that there was an increase of 4.9 per cent in GDP in real terms in Q3 2018 compared with Q3 2017. Information & communication made the most positive contribution to the Q3 result, rising by 19.5 per cent with Construction recording an increase of 16.8 per cent. Increases were also recorded in Financial and Insurance activities (5.5 per cent), Distribution, Transport, Hotels and Restaurants (5.1 per cent), Public Administration, Education and Health (3.7 per cent), Professional, Admin and Support Services (3.4 per cent) and Industry (excluding Construction) (3.2 per cent), while Arts & Entertainment increased by 4.2 per cent compared with Q3 2017. Agriculture activities showed a decline of 13.5 per cent year-on-year.

Factor income outflows were €1,864m higher than in the same quarter of 2017 resulting in an increase in GNP of 3.1 per cent year-on-year.