Quarterly increase of 0.7 per cent in Real GDP 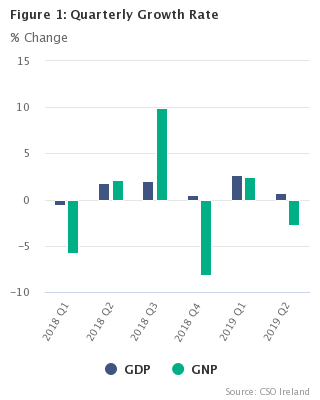 On a seasonally adjusted basis, initial estimates indicate that GDP in volume terms increased by 0.7 per cent for the second quarter of 2019. Real GNP decreased by -2.8 per cent over the same period.

Value added of Information & Communication rose by 8.1 per cent in volume terms in Q2 2019 compared with the previous quarter. Industry (excluding Construction) recorded a 5.7 per cent increase in real terms with Agriculture, Forestry and Fishing recording a 3.9 per cent increase, see Table 5. Public Administration, Education & Health and Construction grew by 1.4 per cent and 0.4 per cent respectively over the same period. Professional and Administrative Services recorded a decline of 1.3 per cent quarter-on-quarter with Distribution, Transport, Hotels & Restaurants and Financial & Insurance activities both recording small declines of 0.2 per cent over the period.

On the expenditure side of the accounts (Table 7), Capital formation increased by 182 per cent or €31.4 billion in Q2 2019 compared with the previous quarter and accounted for 58 per cent of domestic demand in Q2 2019. Imports increased by 43.0 per cent in Q2 2019 compared with Q1 2019.  These two impacts are largely offsetting and do not have a significant effect on the GDP growth rates reported.  Exports increased by 2.6 per cent which meant that overall net exports for the quarter were broadly in balance (a decline of -€30.1 billion quarter-on-quarter). Personal Consumption Expenditure increased by 0.8 per cent and accounted for 32 per cent of domestic demand in Q2 2019 (an unusually low percentage contribution to domestic demand but this decline is on foot of the significant increase in Capital Investment in the quarter). Government expenditure showed an increase of 1.0 per cent over the same period.

Initial estimates for the second quarter of 2019 indicate that there was an increase of 5.8 per cent in GDP in real terms in Q2 2019 compared with Q2 2018. Information & Communication made the most positive contribution to the Q2 result, rising by 32.4 per cent with Agriculture recording an increase of 16.2 per cent (but recalling the severe weather events that occurred in the Q1 2018 reference quarter that had consequential follow-on impact in the Q2 2018 reference quarter). Increases were also recorded in Construction (6.0 per cent), Financial and Insurance activities (5.3 per cent), Industry (excluding Construction) (4.9 per cent), Public Administration, Education and Health (4.0 per cent), Professional and Administrative Services (2.2 per cent), Real Estate activities (1.8 per cent) and Arts and Entertainment (0.4 per cent). The Distribution, Transport, Hotels and Restaurants sector was little changed year-on-year.

Factor income outflows were 26.1 per cent higher than in the same quarter of 2018 resulting in an increase in GNP of 0.3 per cent year-on-year.