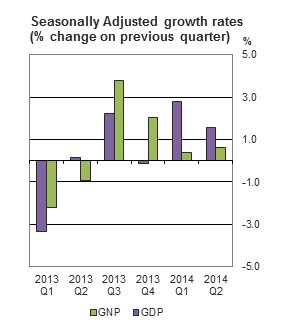 This release gives the official quarterly national accounts estimates for Ireland. It provides the first set of results for Q2 of 2014.

National accounts are compiled in the EU according to the European System of National and Regional Accounts (ESA) framework. In 2014, the new ESA 2010 framework will replace the current ESA 95 version and all EU member states are required to adopt ESA 2010 by September 2014.  ESA 2010 is the European version of the current UN mandated international standards for national accounts statistics, the System of National Accounts (SNA) 2008.  The results for all years in this release are published on an ESA 2010 basis. For Ireland, the ESA 2010 change with the greatest impact on gross domestic product (GDP) is the new treatment of research and development (R&D) expenditure.  Under ESA95, R&D expenditure was treated as an ancillary cost to the main production of an enterprise, while under ESA2010, R&D expenditure is recognised as capital investment.

In addition to the ESA 2010 changes, the results include additional estimates for illegal economic activities in line with the requirement from the European statistical agency, Eurostat to include such estimates in the National Accounts before September 2014.

The aggregates shown have been derived from a wide variety of sources. As some of the available sources are of lesser reliability than those used for the annual national accounts, the quarterly estimates given in this release have a higher margin of error than the annual figures.

Minor revisions have been made to the previously published figures for 2014.

For the annual accounts, GDP at current prices is calculated using two independent approaches i.e. the income and expenditure methods. On a quarterly basis, it is not possible to compile a reliable income based estimate. The estimates in current prices are on the expenditure basis only and these are supplied in Table 2. The balancing item (i.e. the statistical discrepancy) which is required to adjust the expenditure based estimate to the definitive measure of GDP (the average of income and expenditure) has been projected forward into 2014 in line with the trend in the aggregate of all the other expenditure items

Similarly, on the expenditure side, the growth estimates are weighted by expenditure weights of the previous year. The average of the two measures is the growth measure used. The change over a period of years is then calculated by linking together the annual changes. The estimates in this release are referenced to 2012 values. A consequence of this method is that the individual components of GDP at reference year values do not add to the total.

Net factor income from the rest of the world (NFI) is the difference between investment income (interest, profits etc.) and labour income earned abroad by Irish resident persons and companies (inflows) and similar incomes earned in Ireland by non-residents (outflows). The data are taken from the Balance of Payments statistics that are based on the new BPM6 framework introduced in the Q1 2014 Balance of Payments release. (BPM6 is consistent with ESA 2010:for further details please refer to Q1 2014 Balance of Payments release) The components of interest flows involving banks in the Net factor income item in the national accounts are constructed on the basis of “pure” interest rates (that is exclusive of FISIM).Under BPM5 based Balance of Payments data released previously, this FISIM adjustment was not carried out. However, under the new BPM6 framework,FISIM is now being treated as part of financial services,rather than income,bringing it into line with the treatment of FISIM in national accounts statistics. The deflator used to generate the constant price figures is based on the implied quarterly price index for the exports of goods and services. In some years exceptional income payments have had to be deflated individually.

Scan the QR code below to view this release online or go to
http://www.cso.ie/en/releasesandpublications/er/na/quarterlynationalaccountsquarter22014/