GDP up 0.4 per cent on a seasonally adjusted basis 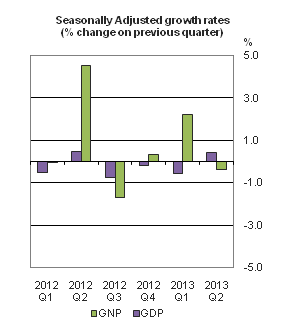 On the output side of the accounts Building and construction grew by 4.2 per cent while Distribution, transport, software and communication increased by 1.4 per cent in volume terms between  Q1 2013 and Q2 2013. On the other hand Industry(including Building and construction) declined by 0.3 per cent, Public administration decreased by 1 per cent and Other services contracted by 0.1 per cent in volume terms on a seasonally adjusted basis between Q1 2013 and Q2 of 2013.

This release gives the official quarterly national accounts estimates for Ireland. It provides the first set of results for Q 2  2013 .These are compiled in accordance with the ESA95 system of accounts, as used in all member states of the European Union. The aggregates shown have been derived from a wide variety of sources. As some of the available sources are of lesser reliability than those used for the annual national accounts, the quarterly estimates given in this release have a higher margin of error than the annual figures.

Minor revisions have been made to the previously published figures for 2013.

For the annual accounts, GDP at current prices is calculated using two independent approaches i.e. the income and expenditure methods. On a quarterly basis, it is not possible to compile a reliable income based estimate. The estimates in current prices are on the expenditure basis only and these are supplied in Table 2. The balancing item (i.e. the statistical discrepancy) which is required to adjust the expenditure based estimate to the definitive measure of GDP (the average of income and expenditure) has been projected forward into 2013 in line with the trend in the aggregate of all the other expenditure items

Similarly, on the expenditure side, the growth estimates are weighted by expenditure weights of the previous year. The average of the two measures is the growth measure used. The change over a period of years is then calculated by linking together the annual changes. The estimates in this release are referenced to 2011 values. A consequence of this method is that the individual components of GDP at reference year values do not add to the total.

Net factor income from the rest of the world (NFI) is the difference between investment income (interest, profits etc.) and labour income earned abroad by Irish resident persons and companies (inflows) and similar incomes earned in Ireland by non-residents (outflows). The data are taken from the Balance of Payments statistics. However the components of interest flows involving banks in this item in the national accounts are constructed on the basis of “pure” interest rates (that is exclusive of FISIM) whereas in the balance of payments the FISIM adjustment is not carried out. There is an equal and opposite adjustment then made to the imports and exports of services in the national accounts which is not made to these items in the balance of payments.  The deflator used to generate the constant price figures is based on the implied quarterly price index for the exports of goods and services. In some years exceptional income payments have had to be deflated individually.

Scan the QR code below to view this release online or go to
http://www.cso.ie/en/releasesandpublications/er/na/quarterlynationalaccountsquarter22013/