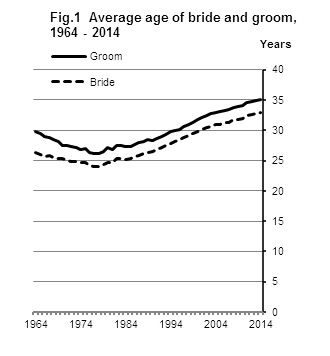 Civil Marriage ceremonies were the most popular choice for non religious marriage ceremonies accounting for 6,167 (28%) of all marriages.  In recent years the Humanist Association has also risen in popularity with 895 (4.1%) of  marriages in 2014. See table 1, 3 and 17.

August was the most popular month for marriages in 2014

Groom older than bride in 63% of marriages

There were 2,451 marriages involving at least one divorced person in 2014, including 515 marriages where both parties were divorced.  Civil ceremonies accounted for 1,714 of these marriages, 190 were Spiritualist Union of Ireland ceremonies, 182 were Roman Catholic ceremonies, and the remaining 365 were other religious ceremonies.  See table 17.

Couples residing outside Ireland before marriage account for 11% of marriages

Over three-quarters (76%) of Civil Partnerships resident in Leinster

Show Table 20 Marriages in 2014 classified by age of groom and bride in single years; all marriages

Show Table 21 Marriages in 2014 classified by age of groom and bride in single years; first marriages only

Show Table A Divorce, Judicial Separation and Nullity applications received and granted by the courts in year ending December 2013

These statistics have been compiled from the marriage registration forms of all marriages registered in the Republic of Ireland in 2014.

Where the weekday and month of a marriage are specified in this release, it refers to the date on which the marriage occurred. Note that some marriages registered in 2014 (and hence included in these statistics) occurred in years before 2014.

Marriages celebrated according to the rites and ceremonies of the Roman Catholic Church, the rites and ceremonies of the Church of Ireland, the forms and disciplines of the Presbyterian Church,  the usages of the Methodist Church, the usages of people professing the Jewish religion, The Spiritualist Union of Ireland and the Humanist Association have been clasified under their respective relegions.   The usages of certain other Religious Bodies have been classified under 'other religious'.  (Tables 1, 13, 14, 15 and 17 refer)

This classification is determined by a person’s occupation.  The men and women whose marriages were registered in 2012 were classified by standard occupation codes.  This replaces the socio-economic group classification used up to 2011.

Scan the QR code below to view this release online or go to
http://www.cso.ie/en/releasesandpublications/er/mcp/marriagesandcivilpartnerships2014/