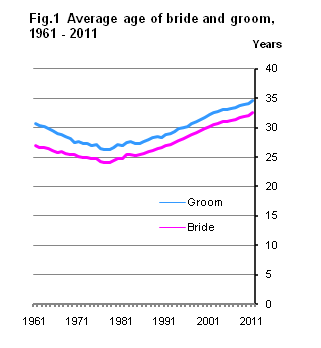 Friday and Saturday were the most popular days of the week to get married with 70% of marriages occurring on those days.  The least popular day was Sunday when 177 couples wed (less than 1% of total). See table 16.

Saturday 30th July was the most popular date for marriage in 2011 with 263 (1%) marriages taking place. This was closely followed by Friday 26th August, when 251 (1%) marriages occurred.

Cyprus had the highest crude marriage rate in the EU 27 with a rate of 7.3 per 1,000 population Bulgaria had the lowest rates, with 2.9 marriages per 1,000 population.  Ireland, along with the Czech Republic, Austria and the Netherlands was ranked 14thwith a rate of 4.3 per 1,000 of the population.  This was slightly lower than the European (EU 27) average rate which was 4.4 marriages per thousand population in 2010.  Figures for average rate for 2011 are not available for all EU27 countries at time of printing.

Groom older than bride in 64% of marriages

In 2011, the groom was older than the bride in almost 64% of marriages. This was generally witnessed across all age groups except in the case of grooms under 25, where the bride was older in 43% of marriages. See tables 7, 8 and fig 4. 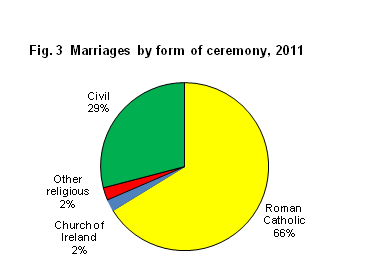 There were 2,272 marriages involving at least one divorced person in 2011, including 447 marriages where both parties were divorced.  Civil ceremonies accounted for 1,855 of these marriages, 234 were Roman Catholic ceremonies, and the remaining 183 were other religious ceremonies.  See table 17.

Couples residing outside Ireland before marriage account for 8% of marriages

Over 20% (4,036) of all marriages involved the bride and groom being of the same socio-economic group.

Number of divorces granted down by 9%

Civil Partnerships, introduced by the Civil Partnership and Certain Rights and Obligations of Cohabitants Act 2010, enabled same-sex couples to obtain legal recognition of their relationship and this regulation was enacted on the 01/01/2011.

Over 70% of Civil Partnerships resident in Leinster

Show Table 20 Marriages in 2011 classified by age of groom and bride in single years; all marriages

Show Table 21 Marriages in 2011 classified by age of groom and bride in single years; first marriages only

Show Table A Divorce, Judicial Separation and Nullity applications received and granted by the courts in year ending December 2011

These statistics have been compiled from the marriage registration forms of all marriages registered in the Republic of Ireland in 2011.

Where the weekday and month of a marriage are specified in this release, it refers to the date on which the marriage occurred. Note that some marriages registered in 2011 (and hence included in these statistics) occurred in years before 2011.

There is at present no provision for the civil registration of Muslim Marriage Ceremonies solemnised in the State.

This classification is determined by a person’s occupation or, in some cases by a combination of occupation and employment status. The men and women whose marriages were registered in 2011 were classified by SEG on the basis of the information on occupation given in the marriage register.

Scan the QR code below to view this release online or go to
http://www.cso.ie/en/releasesandpublications/er/mcp/marriagesandcivilpartnerships2011/