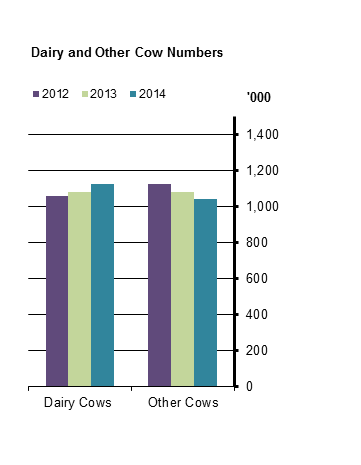 Further comparisons with the December 2013 results indicate that:

Coverage    Farms where the agricultural area used was at least one hectare (2.47 acres) are included in the December Livestock Sample Survey. Farms with less than one hectare may also be included if they were engaged in intensive production.

a single unit, both technically and economically, which has a single management

and which provides agricultural products.

Cattle: The results for cattle are obtained from Department of Agriculture Food and the Marine (DAFM) Animal Identification and Movement (AIM) system. This system was introduced at the beginning of 2000 and involves electronically recording data on animal movements.

Rounding     As the figures in the text have been rounded to the nearest 100 units there may be slight discrepancies between the sum (or difference) of the constituent items and the total shown.

Scan the QR code below to view this release online or go to
http://www.cso.ie/en/releasesandpublications/er/lsd/livestocksurveydecember2014/