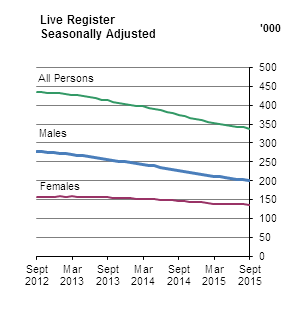 Craft and related (18.9%) remained the largest occupational group1 on the Live Register in September, despite the fact that the number in the group fell over the year by 10,592 (-14.4%) to 62,784.  The second largest annual percentage decrease was in the Professional group (-11.8%). The two smallest occupational groups in September were the Associate professional and technical and the Managers and administrators groups which accounted for 2.9% and 4.4% of the Live Register respectively. See table 5 and graph below.

Data up to the end of August 2015 on the number of people availing of a range of programmes targeted primarily at the long-term unemployed (over 12 months) and other welfare recipients is provided in the Annex – Live Register Activation Programmes table.

The Standardised Unemployment Rate (SUR) series, previously in Table 3, has been discontinued from May 2015. It has been replaced by the Monthly Unemployment release, which is published  two days before the Live Register.

Detailed tables relating to regional and scheme data are available on the CSO website through the CSO Main Data Dissemination Service, StatBank, to see these please click here.

Scan the QR code below to view this release online or go to
http://www.cso.ie/en/releasesandpublications/er/lr/liveregisterseptember2015/