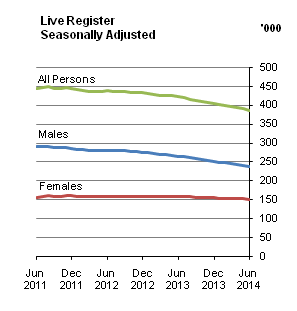 Data up to the end of May 2014 on the number of people availing of a range of programmes targeted primarily at the long-term unemployed (over 12 months) and other welfare recipients (including Lone Parents) is provided in the Annex – Live Register Activation Programmes table.

The calendar quarter estimates for Q1 2014 (adjusted for seasonality) are:

Scan the QR code below to view this release online or go to
http://www.cso.ie/en/releasesandpublications/er/lr/liveregisterjune2014/