87% of households have access to the internet at home 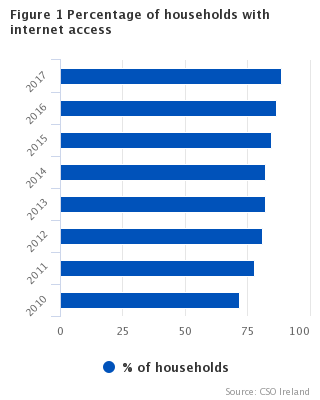 Show Table 2(a) Individuals' use of the internet classified by broad frequency of use, 2011 to 2016

Show Table 2(b) Individuals use of the internet classified by detailed frequency of use, 2013 to 2016

Show Table 2(c) Individuals who recently used the internet (in the last 3 months) classified by type of device used, 2016

Of the internet activities surveyed in 2016, the most popular activity was Email (83%). The next most common internet activity in 2016 was Finding information about goods and services (82%), followed by Social networking (70%) and Internet banking (64%). See table 3 and figure 5.

Online activities analysed by age group shows Email (sending/receiving emails) and Finding information on goods and services were the top 2 activities carried out by all age groups over 30 years of age. Those aged 30 to 44 reported the highest use of Email at 86%, while 78% of the 60-74 years age group used Email. See table 3 and figure 5.

Individuals aged 16 to 29 years were more likely to engage in online leisure or recreation activities, such as Social networking (91%), Listening to music (72%), Uploading self-created content (65%) and Watching internet streamed TV (55%), when compared to other age groups. See table 3 and figure 5.

Show Table 3 Individuals who recently used the internet (in the last 3 months) classified by types of internet activities, 2016

Clothes or sports goods were the most popular online purchase in 2016, purchased by 42% of individuals. The next most common types of internet purchases made by individuals in the last 12 months (prior to interview) were Other travel arrangements (40%), and Holiday accommodation and Tickets for events, both at 38%.  See table 4a and figure 6.

There are clear differences between age groups in the types of goods and services bought online. The largest difference was for Clothes or sports goods, with 51% of individuals aged 16 to 29 years purchasing these, compared to 12% of those aged 60 to 74. See table 4a and figure 6.

Show Table 4(a) Individuals that use the internet classified by types of purchases made online during the last 12 months, 2016

Show Table 4(b) Individuals who made purchases online in the last 12 months classified by problems encountered when buying online, 2016

Show Table 4(c) Individuals who purchased over the internet in the last 3 months classified by number of purchases made in the same period, 2016

Data for 2016 indicates that 45% of internet users used storage space on the internet to save files (documents, pictures, music, videos) - a marginal increase on 2015 (44%) and an increase of 10 percentage points compared with the same period in 2014. The 16-29 and 30-44 years age groups were the largest users of storage space on the internet as a method of saving files in 2016, at 56% and 50% respectively. By comparison, only 21% of individuals in the 60-74 age category used such storage. See table 5 and figure 7.

Show Table 5 Percentage of individuals that use the internet to store files electronically, classified by personal characteristics, 2014 to 2016

Show Table 6 Individuals that used the internet during the last 12 months classified by the type of personal information they provided, 2016

Show Table 7 Individuals that used the internet during the last 12 months classified by the type of actions they took to protect their information on the internet, 2016

The Information and Communication Technology (ICT) household survey covers a range of topics related to the use of ICT by households and individuals. The ICT questionnaire focuses on the use of ICT for non-work related activities. The survey was conducted in the 1st Quarter of 2016 and asked respondents about their ICT activities over the previous 12 months. Each year, the survey includes a specific group of questions relating to a particular area of ICT. In 2016, additional questions relating to the Security and Privacy were included.

The annual ICT Household survey by the QNHS contributes to the EU requirement under Regulation (EC) No 808/2004 of the European Parliament and of the Council of 21 April 2004 concerning Community statistics on the information society (OJ L143, 30.04.2004, p. 49). The QNHS began in September 1997, replacing the annual April Labour Force Survey (LFS). The purpose of the survey is the production of quarterly labour force estimates and occasional reports on special social topics. The ICT Household questionnaire is conducted in Quarter 1 as part of the QNHS. The annual ICT household survey is one of the special module subjects that make up the ad-hoc module surveys appended onto the main QNHS Labour Force Survey.

The 2016 ICT household questionnaire is available at

Scan the QR code below to view this release online or go to
http://www.cso.ie/en/releasesandpublications/er/isshh/informationsocietystatistics-households2016/