85% of households have access to the internet at home 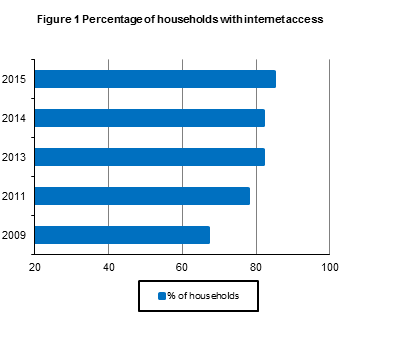 Data for 2015 indicates that fixed broadband was the most commom type of internet access in the household (77% compared with 38% using mobile broadband). See table 1b and figure 2

Data for 2015 indicates that 44% of internet users use storage space on the internet to store files electronically (documents, pictures, music, videos or other files). This represented an increase of 9 percentage points when compared to 2014. 56% of individuals in the 16-29 age category indicated they used storage space on the internet as a method of saving files compared with 22% of the 60-74 age category. See table 5 and figure 6

Show Table 2(a) Individuals use of the internet classified by frequency of use, 2010 to 2015

Show Table 2(b) Individuals use of the internet classified by detailed frequency of use, 2012, to 2015

Show Table 3 Individuals who recently used the internet (in the last 3 months) classified by types of internet activities, 2015

Show Table 4(a) Individuals classified by types of purchases made online during the last 12 months, 2015

Show Table 4(b) Individuals who use the internet who did not purchase online in the last 12 months classified by reasons for not buying online, 2015

Show Table 4(c) Individuals who purchased over the internet in the last 3 months classified by number of purchases made in the same period, 2015

Show Table 5 Percentage of individuals that use the internet to store files electronically, classified by personal characteristics, 2014 and 2015

The Information and Communication Technology (ICT) household survey covers a range of topics related to the use of ICT by households and individuals. The ICT questionnaire focuses on the use of ICT for non-work related activities. The survey was conducted in the 1st Quarter of 2015 and asked respondents about their ICT activities over the previous 12 months. Each year the survey includes a specific group of questions relating to a particular area of ICT  In 2015 additional questions relating to the e-commerce were included.

The annual ICT Household survey by the QNHS contributes to the EU requirement under Regulation (EC) No 808/2004 of the European Parliament and of the Council of 21 April 2004 concerning Community statistics on the information society (OJ L143, 30.04.2004, p. 49). The QNHS began in September 1997, replacing the annual April Labour Force Survey (LFS). The purpose of the survey is the production of quarterly labour force estimates and occasional reports on special social topics. The ICT Household questionnaire is conducted in Quarter 1 as part of the QNHS. The annual ICT household survey is one of the special module subjects that make up the ad hoc module surveys appended onto the main QNHS Labour Force Survey.

The 2015 ICT household questionnaire is available at

Scan the QR code below to view this release online or go to
http://www.cso.ie/en/releasesandpublications/er/isshh/informationsocietystatistics-households2015/