82% of households have access to the internet at home 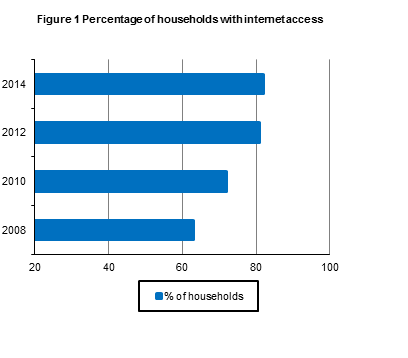 Data for 2014 indicates that portable computers (including netbooks and tablets) were the most popular types of devices used to access the internet in the household (88% compared with 62% access using mobile phones or other mobile devices). See table 1b and figure 2

The most popular activities of individuals who accessed the internet in the last three months were, Email (85%), Social networking (63%), Internet banking (60%) and Using services related to travel or travel related accommodation (54%). Of the 16-29 age category, 89% of individuals access the internet for social networking purposes compared with just 25% of the 60-74 age category. See table 3 and figure 4

Half of indviduals (50%) aged 16 - 74 indicated they purchased goods or services over the internet in the twelve months prior to the interview. The most popular types of internet purchases made by individuals were Other travel arrangements (31% of individuals), Tickets for events (30%), and Holiday accommodation (29%). See table 4 and figure 5.

Show Table 1(b) Households with internet access classified by type of device used to access the internet, 2014

Show Table 2(b) Individuals who recently used the internet (in the last 3 months) classified by detailed frequency of use, 2011-2014

Show Table 3 Individuals who recently used the internet (in the last 3 months) classified by types of internet activities, 2014

Show Table 4 Individuals classified by types of purchases made online during the last 12 months, 2014

Show Table 5(b) Individuals who used storage space on the internet classified by whether or not they paid for storage space, 2014

Show Table 5(c) Individuals who recently used the internet (in the last 3 months) classified by methods of electronic file sharing, 2014

The Information and Communication Technology (ICT) household survey covers a range of topics related to the use of ICT by households and individuals. The ICT questionnaire focuses on the use of ICT for non-work related activities. The survey was conducted in the 1st Quarter of 2014 and asked respondents about their ICT activities over the previous 12 months. Each year the survey includes a specific group of questions relating to a particular area of ICT; in 2014 questions relating to the use of Cloud Computing were included.

The annual ICT Household survey by the QNHS contributes to the EU requirement under Regulation (EC) No 808/2004 of the European Parliament and of the Council of 21 April 2004 concerning Community statistics on the information society (OJ L143, 30.04.2004, p. 49). The QNHS began in September 1997, replacing the annual April Labour Force Survey (LFS). The purpose of the survey is the production of quarterly labour force estimates and occasional reports on special social topics. The ICT Household questionnaire is conducted in Quarter 1 as part of the QNHS. The annual ICT household survey is one of the special module subjects that make up the ad hoc module surveys appended onto the main QNHS Labour Force Survey.

The 2014 ICT household questionnaire is available at

Scan the QR code below to view this release online or go to
http://www.cso.ie/en/releasesandpublications/er/isshh/informationsocietystatistics-households2014/