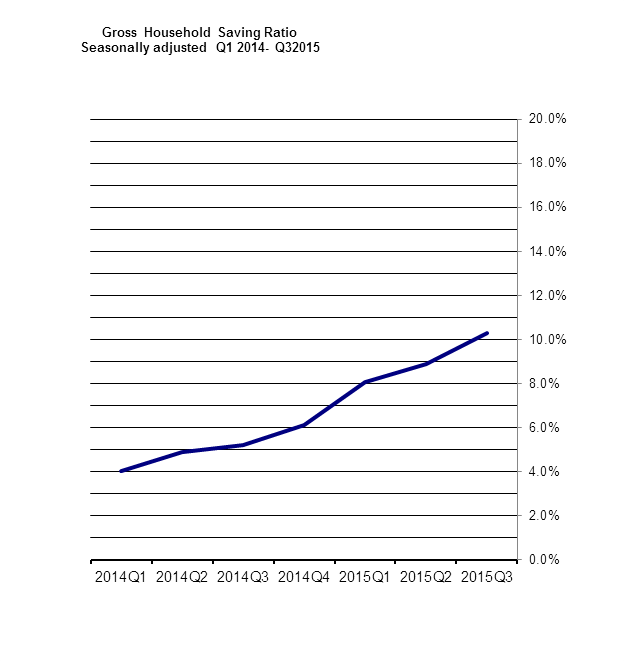 The derived gross saving ratio, which expresses saving as a percentage of gross disposable income, increased from 8.9 per cent in the second quarter of 2015 to 10.3 per cent in the current quarter (see Background Notes - definitions).

Increased saving for the overall economy in Q3 2015

The saving deficit of Government was €102m in Q3 2015, an improvement on the Q3 2014 deficit of €1,306m.  This change is explained by increases in receipts and reductions in payments.  Taxes on production and imports (D.2), current taxes (D.5) and social contributions (D.6) received all increased.  There were decreases in social benefits (D.6) and current transfers (D.7) paid.

Rest of the World Sector (S.2)

Show 1.8 Change in net worth due to saving and capital transfers account/1.9 Acquistion of Non- Financial Assets account

In the sector accounts, institutional sectors are distinguished not in terms of the nature of their production activity (such as agriculture, industry, services etc) but rather in terms primarily of the institutional form of the units that make them up. Thus companies, whether engaged in commercial non-financial or financial business, are grouped in a different sector from households, even though the latter are in many cases also engaged in commercial production, and from government or other non-market producers such as voluntary agencies.

Institutional Sectors The classification system is that of the European System of Accounts 2010 (ESA2010). The sectors and sub-sectors distinguished in the present publication are as follows:

S.1 Resident Economy is the sum of all the sectors of the domestic economy.

S.11 Non-Financial Corporations are corporate bodies producing goods and non-financial services on a commercial basis. They include public limited companies, private companies and other corporate forms of business, whether owned by residents (including the government) or non-residents or both. In particular, therefore, Irish subsidiaries of foreign companies and the Irish branches of foreign companies operating in Ireland on a branch basis are included; while the foreign subsidiaries of Irish companies and the foreign branches of Irish companies operating abroad are excluded (they form part of the Rest of the World sector S.2). The business activities of self-employed persons (quasi-corporations) are in principle to be included here if separate accounts are available for statistical purposes.Under the implementation of ESA2010,entities which operate as holding companies for non-financial corporations are now classified in the financial sector.

S.12 Financial Corporations are corporate bodies producing financial services on a commercial basis. As with S.11, they can take various legal forms, with a range of ownership arrangements. They include monetary financial institutions, other financial intermediaries, financial auxiliaries and insurance corporations and pension funds.

S.13 General Government consists of central and local government . Central government includes the Ireland Strategic Investment Fund (formerly the NPRF), and non-commercial agencies owned and funded by government, but do not include commercial state-owned companies (which are proper to S.11 or S.12 as appropriate).

S.14 + S.15 Households (S.14) and Non-Profit Institutions Serving Households (S.15).  S.14 consists of persons in their capacity as holders of financial assets or as borrowers. The business assets and liabilities of unincorporated self-employed persons are also mainly reflected in this sector. S.15 consists of non-profit institutions such as charities and non-commercial agencies not owned by the government, such as some schools and hospitals.

S.2 Rest of the World. The figures represent the economy’s transactions with non-residents. The conceptual definition is the same as in the balance of payments (BOP) statistics. In particular, non-residents include foreign subsidiaries of Irish companies, the foreign branches of Irish companies that operate abroad on a branch basis, and the head offices of foreign companies that operate in Ireland on a branch basis.

S.1N Not Sectorised. In the non-financial accounts an additional residual sector is used to report taxes and subsidies in the Generation of Income Account (Account 1.2) as it is not possible to allocate these amounts to Institutional Sectors. In addition throughout these accounts S.1N is used to report the amounts that appear as the statistical discrepancy in the National Income and Expenditure GDP accounts, arising from the use of two independent estimates of GDP (from the Income and Expenditure approaches). In the Annual National Accounts NIE tables 3 and 5, the official estimate of GDP is reported as the average of the two measures, and the discrepancy is therefore displayed as half the difference between the two independent estimates (and thus with different signs in the two tables).  The discrepancy is projected forward on a quarterly basis in line with the trends in the Expenditure components and is presented in Table 2 of the Quarterly National Accounts. In the quarterly sector accounts it appears in Gross Domestic Product, the opening item in the Generation of Income Account and is then carried through successive accounts via the balancing item. In the final non-financial account,the full amount of the discrepancy then emerges as the unallocated net lending or borrowing in the economy.

Sector accounts present a coherent overview of all economic processes and the roles played by the various sectors. Each economic process is described in a separate account. The accounts describe successively generation of income, primary and secondary income distribution, final consumption, redistribution by means of capital transfers and capital formation. Note that the Production Account (1.1) from the Annual Accounts is not included in these quarterly accounts as the data is not available on a quarterly basis.   The accounts record economic transactions, distinguishing between uses and resources, (e.g. the resources side of the transaction category D.41 Interest records the amounts of interest receivable by the different sectors of the economy and the uses side shows interest payable) with a special item to balance the two sides of each account. By passing on the balancing item from one account to the next a connection is created between successive accounts.

The accounts are compiled for the total economy and include accounts for separate domestic sectors and the Rest of the World sector. In this way the sector accounts describe:

The successive accounts are explained in more detail below.

This Account is not presented in the Quarterly Non-Financial Accounts as quarterly data is not available.

This account displays the transactions through which Gross Domestic Product at market prices is distributed to labour (compensation of employees), capital (operating surplus) and government (the balance of taxes and subsidies on production). The balancing item for the Household and NPISH sector in this account is called mixed income, because apart from operating surplus it also contains compensation for work by self-employed persons and their family members. B.2g/B.3g Gross Operating Surplus / Gross Mixed Income is the balancing item for the entire account.

This account records, as resources, the income from direct participation in the production process, as well as property income received in exchange for the use of land, financial resources and other intangible assets. In addition, this account records the taxes on production and imports received by the government. On the uses side, property income is recorded as well as the subsidies paid by the government.

On this account the interest paid and received are recorded excluding imputed bank services (financial intermediation services indirectly measured -FISIM). In the national accounts insurance technical reserves are seen as a liability of insurance enterprises and pension funds to policyholders. Therefore, the receipts from investing these reserves are recorded as payments from insurance enterprises and pension funds to households,under D.44 other investment income. The balancing item of this account for each sector is B.5g Gross National Income.  The Primary Income for the total economy is the National Income.

This account is not presented in the Quarterly series.

The secondary distribution of income account shows how primary income is redistributed by means of current taxes on income and wealth, social contributions (including contributions to pension schemes), social benefits (including pension benefits) and other current transfers. The balancing item of this account is B.6g Gross Disposable Income. For the consuming sectors (Households, NPISH and General Government) this item is passed on to 1.6 Use of Disposable Income Account. For the other sectors the disposable income is generally equal to saving. This is then passed on to the capital account.

This account shows the element of disposable income that is spent on final consumption and also the element that is saved. As mentioned above final consumption only exists for Households, NPISH and General Government. The net equity of Households in pension funds is seen as a financial asset that belongs to Households. Changes in these reserves need to be included in the saving of Households. However, contributions to pension schemes and pension benefits have already been recorded on 1.5 Secondary Distribution of Income Account (as social contributions and social benefits). Therefore, an adjustment is needed to include in the saving of Households the change in pension funds reserves on which they have a definite claim. This adjustment is called D.8 ‘Adjustment for the change in pension entitlements’. There is no need for a similar adjustment concerning life insurance because life insurance premiums and benefits are not recorded as current transactions. The balancing item for this account is B.8g Gross Saving.

This account records the summarised transactions of S.2 the Rest of the World sector, including on the uses side exports of goods and services, primary incomes and current transfers receivable. The resources side of this account includes imports of goods and services together with primary incomes and transfers payable. The balancing item is B.12 Current External Balance, which records the balance on current accounts with the Rest of the World.

1.8 Change in Net Worth due to Saving and Capital Transfers

On this account the capital transfers are recorded and combined with gross saving and the current external balance. The resulting balancing item is B.10.1 Changes in Net Worth due to Saving and Capital Transfers.

The household saving ratio is gross household  saving expressed as a percentage of total resources i.e. the sum of gross household disposable income and the adjustment for the change in pension entitlements. Household saving in the relevant quarter represent that part of disposable income that is not spent on final consumption of goods and services.  The use of these saving either for financial investment or debt reduction is not recorded in these accounts but is recorded in the financial account (see Quarterly Financial Accounts http://www.centralbank.ie/polstats/stats/qfaccounts/Pages/releases.aspxpublished by the Central Bank of Ireland and http://www.cso.ie/en/releasesandpublications/ep/p-isanff/isanff2014/ for annual integrated financial and non financial account).

Scan the QR code below to view this release online or go to
http://www.cso.ie/en/releasesandpublications/er/isanf/institutionalsectoraccountsnonfinancialquarter32015/