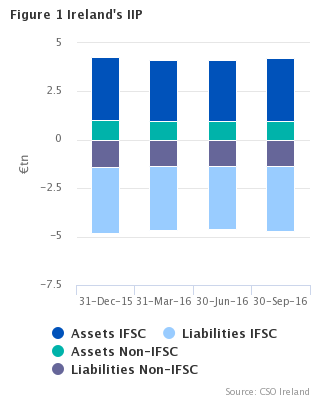 At 30th September 2016, Ireland’s quarterly international investment position (IIP) results show overall stocks of foreign financial assets of €4,224bn – an increase of €86bn on the end-June 2016 level, while the corresponding stocks of foreign financial liabilities increased by €62bn to €4,689bn over the quarter. Irish residents had an overall net foreign liability of €465bn at end-September 2016, a decrease of €23bn on the net foreign liability level at end-June 2016 – see Table 1a.

At 30th September 2016, the gross external debt of all resident sectors (i.e. general government, the monetary authority, financial and non-financial corporations and households) amounted to €2,037bn. This represents a decrease of €63bn in the stock of financial liabilities to non-residents (other than those arising from issues of Irish equities and derivatives contracts) compared to the level shown at 30th June 2016 (€2,101bn) – see Table 6a. Points of note are:

Scan the QR code below to view this release online or go to
http://www.cso.ie/en/releasesandpublications/er/iiped/internationalinvestmentpositionandexternaldebtseptember2016/