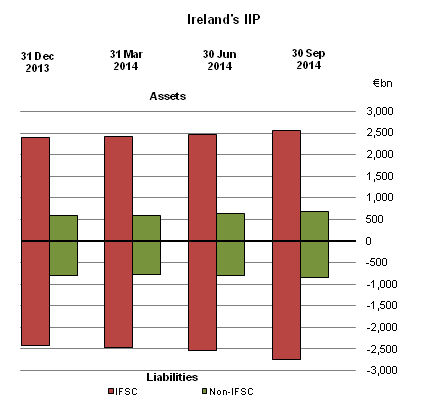 At 30th September 2014, Ireland’s quarterly international investment position (IIP) results show overall stocks of foreign financial assets of €3,374.7bn – an increase of €250bn on the end-June 2014 level, while the corresponding stocks of foreign financial liabilities increased by €248.5bn to €3,551.2bn over the quarter. Irish residents had an overall net foreign liability of €177bn at end-September 2014, a decrease of €1bn on the net foreign liability level at end-June 2014 – see Table 1a.

The analysis of the location of the ultimate controlling parent of Irish resident enterprises, shown for the first time in the Q1 2014 release, has been continued in this publication. The results of this analysis remain stable in the third quarter. Excluding investment funds, Irish controlled enterprises account for 30% of the remaining external assets and 32% of external liabilities. Foreign controlled enterprises, resident in Ireland therefore account for 70% of assets and 68% of liabilities.

With the availability of extra detail collected under the BPM6 standards introduced in June 2014 this new analysis has been added.

For total Portfolio Investment assets, equity and debt securities (see table 3a for this breakdown), the sector of the non-resident issuer is collected. Analysing this data shows that Irish residents hold debt as follows:

At 30th September 2014, the gross external debt of all resident sectors (i.e. general government, the monetary authority, financial and non-financial corporations and households) amounted to €1,670.3bn. This represents an increase of €19.1bn in the stock of financial liabilities to non-residents (other than those arising from issues of Irish equities and derivatives contracts) compared to the level shown at 30th June 2014 (€1,651.2bn) – see Table 6a. Points of note are:

Scan the QR code below to view this release online or go to
http://www.cso.ie/en/releasesandpublications/er/iiped/internationalinvestmentpositionandexternaldebtseptember2014/