Total spending on innovation activities in Ireland during 2016 increased by almost 22% to €4.6 billion 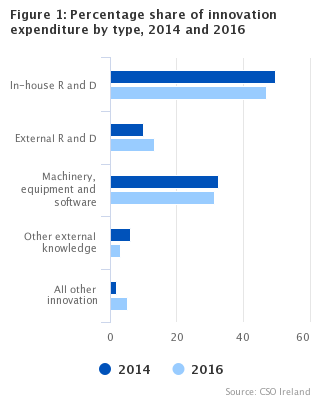 Acquisition of machinery, equipment and software at €1.44bn represented 31% of total spend.

The acquisition of external R&D at €619m represented 13% of total spend. This involves enterprises contracting-out R&D to public or private research organisations or to other enterprises.

Please note, care should be taken in interpreting the results from the Community Innovation Survey (published as Innovation in Irish Enterprises) as those enterprises who confirmed they had innovative activity, their spend represented 1.6% of their turnover and this low expenditure level can lead to volatility in the results over time. See Figure 1 and Headline table.

Industrial enterprises spend on machinery, equipment and software accounted for a quarter of total innovation expenditure

Of the total spend of €4.6bn by enterprises on innovation activities, the Industrial sector accounted for €2.7bn compared to €1.9bn for the Selected Services.

Industrial sector enterprises spent €1,119m on machinery, equipment and software amounting to almost a quarter, 24.2%, of total innovation expenditure. Investment in in-house R&D amounted to  €1,069m followed by €421m on external R&D,  €42m on acquisition of external knowledge and €91m on all other innovation activities.

Selected Services sector enterprises spent €1,105m on in-house R&D and €322m on machinery, equipment and software. A further €198m was spent on external R&D, €97m on acquisition of external knowledge, and €153m on all other innovation activities. See Table 1.

Even though foreign owned enterprises accounted for only 19% of all relevant enterprises, they accounted for €2.9bn or 64% of all innovation-related expenditure, including €1.4bn on in-house R&D.

Irish owned enterprises, which accounted for 81% of all relevant enterprises, spent €1.7bn on innovation related activities in 2016 or 36% of the total, of which €793m was spent on in-house R&D.

The distribution of innovation expenditure between Irish and foreign owned enterprises has stayed broadly consistent over the period 2010-2016. See Figure 2 and Table 1.

When looking at nationality of ownership and business sectors the breakdown of enterprises that are active innovators has remained relatively stable over the last number of years. See Figure 3 and Table 2.

Over 43% of foreign owned enterprises had innovation expenditure

Of the enterprises surveyed in the Industry and Selected Services sectors, 57% were innovation active in the period 2014-2016. These enterprises generated 77% of total turnover and employed almost three quarters of total persons engaged in these two sectors.

Enterprises classed as innovation active are those enterprises that have carried out a product, process, organisational or marketing innovation between 2014-2016. They may also exercise an intellectual property right. See Figure 5 and Table 3.

Almost 43% of all enterprises had technological innovation during 2014-2016

Overall, it was found that 43% of all enterprises with ten or more persons engaged in the Industrial and Selected Services sectors were technologically innovative in the reference period. These enterprises generated 69% of all turnover and employed 62% of persons engaged in the Industry and Selected Services sectors. See Figure 6.

The Community Innovation Survey is carried out in all EU member states. The most recent data available from Eurostat is taken from the 2012-2014 survey and allows comparisons across the entire community. When analysing the 2012-2014 results, Ireland shows the 4th highest innovation rates of all countries for whom data has been published, at 61%.

A marketing innovation is the implementation of a new marketing concept or strategy that differs significantly from an enterprise’s existing marketing methods and which has not been used before. It requires significant changes in product design or packaging, product placement, product promotion or pricing.

Ireland had the highest rate of marketing innovative enterprises at 39.6% in the period 2012–2014, with Germany having the second highest rate at 35.9%.

Figures for 2014–2016 show marketing innovation had fallen in Ireland to 34.7%. However, comparable innovation activity rates will not be available for the other EU member states until Q4 2018. See Figure 8.

Of all technologically innovative enterprises, 30% indicated that they engaged in some co-operative activity when developing their innovations compared to 31% in the 2012-2014 survey. Enterprises reported in 24% of cases that they were engaged in technological innovation co-operation with partners located in Ireland, compared with 19% of enterprises engaged with partners in Other Europe. See Figure 13.

Intellectual Property Rights can involve applying for a patent or European utility model, registering a trademark or industrial design right, use of trade secrets or claiming copyright.

The Community Innovation Survey (CIS), also known as Innovation in Irish Enterprises (IIE) is a survey of innovation activities of enterprises in Ireland and other EU Member States. The CIS is carried out under the STATISTICS (COMMUNITY INNOVATION SURVEY) ORDER 2017 (S.I. No 40 of 2017) made under the Statistics Act, 1993. The survey collects information about product and process innovation, as well as organisational and marketing innovations and other key variables during the three year period 2014 to 2016 inclusive. Most questions cover new or significantly improved goods or services or the implementation of new or significantly improved processes, logistics or distribution methods.

The CIS (IIE) was previously conducted by Forfás but is now solely conducted by the CSO to increase efficiency in the collection of statistical data and to reduce the burden on the participating enterprises. Data were collected in accordance with Section 33 of the Statistics Act, 1993 and with EU law and the survey was carried out under the agreed set of international rules as laid out in the OECD Oslo Manual. Data are strictly confidential and will be used only for statistical purposes.

Survey
The CIS (IIE) survey sampled enterprises with ten or more persons engaged in the Selected NACE categories as included in the table below. The CSO conducted a postal survey in 2015. A total of c. 4,500 survey forms were issued to the sampled enterprises from the CSO’s Business Register. The response rate was 66%.

Questionnaire
The CIS questionnaire is available on the CSO Website as follows: CIS 2016

PRODUCT INNOVATION:
The market introduction of a new or a significantly improved good or service with respect to its capabilities, user friendliness, components or sub-systems. The product innovation could either be new to the market or new to the firm.

PROCESS INNOVATION:
The implementation of a new or significantly improved production process, distribution method, or support activity for goods and services. The process innovation could either be new to the market or new to the firm.

NEW TO MARKET INNOVATION:
An innovation activity, which saw the introduction of a new or significantly improved good or service by the firm onto its operating market before other competitors.

NEW TO FIRM INNOVATION:
An innovation activity which saw the introduction of a new or significantly improved good or service to the firm, and which was already available from competitors in the operating sector.

INNOVATION EXPENDITURE:
Spending on activities to support and implement production or process innovations.

ORGANISATIONAL INNOVATION:
The implementation of new or significant changes in firm structure or management methods that are intended to improve your firm’s use of knowledge, the quality of your goods and services or the efficiency of work flows.

MARKETING INNOVATION:
The implementation of a new marketing concept or strategy that differs significantly from your enterprise’s existing marketing methods and which has not been used before. It requires significant changes in product design or packaging, product placement, product promotion or pricing.

Scan the QR code below to view this release online or go to
http://www.cso.ie/en/releasesandpublications/er/iie/innovationinirishenterprises2016/