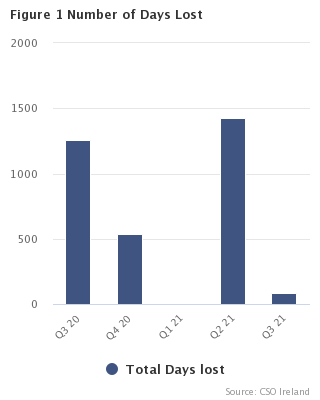 There was one industrial dispute in progress in the third quarter of 2021. It involved one firm and 43 workers and resulted in 86 days lost. See Table 1

Show Table 1 Industrial Disputes which began or were in progress in each quarter, 2013-2021

The information on Industrial Disputes is based on details supplied by the Industrial Relations Section, Department of Enterprise, Trade and Employment (https://enterprise.gov.ie/en/) and on information collected directly from other sources by the Central Statistics Office.

Prior to Q4 2019, industrial disputes which began and which were in progress in each quarter were classified by Economic Sector (NACE Rev 2). From Q4 2019, this classification is no longer available and only the number of firms, number of workers involved and numbers of days lost will be available for industrial disputes which begin and are in progress on a quarterly basis.

Scan the QR code below to view this release online or go to
http://www.cso.ie/en/releasesandpublications/er/id/industrialdisputesquarter32021/