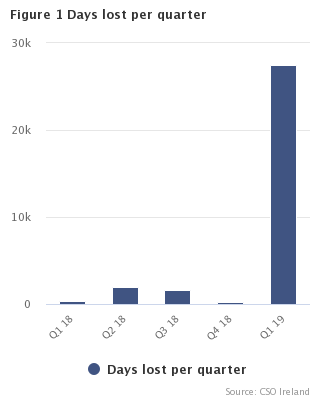 There were three industrial disputes in progress in the first quarter of 2019 involving three firms, and resulting in an estimated 27,415 days lost in the quarter. See table 1.

There was one dispute during the same period last year which resulted in 290 days lost. See table 2.

Days lost for one industrial dispute in the Human health and social work activities sector are estimated and, as such, should be treated with caution. The CSO has at the time of publication also been unable to establish the number of workers involved in this industrial dispute.

Show Table 2 Industrial Disputes which began or were in progress in each quarter, 2012-2019

The information on Industrial Disputes is based on details supplied by the Industrial Relations Section, Department of Business, Enterprise and Innovation (https://www.dbei.gov.ie/en/) and on information collected directly from other sources by the Central Statistics Office.

Scan the QR code below to view this release online or go to
http://www.cso.ie/en/releasesandpublications/er/id/industrialdisputesquarter12019/