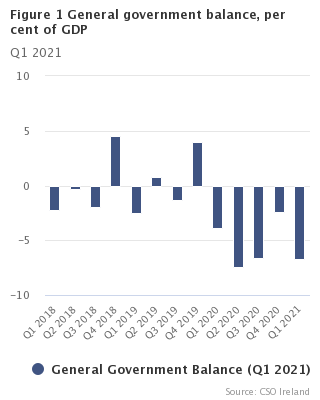 General government recorded a deficit of €6.8bn (6.7% of quarterly GDP) in the first quarter of 2021 and is the fifth consecutive deficit. While the first quarter position is generally a deficit, due to the timing of revenue and expenditure flows over the course of the year, the scale of the deficit this quarter reflects the ongoing pandemic supports. The level of expenditure rose by €4.8bn compared with Q1 2020 while revenue has increased by €1.6bn. Excluding c.€3.7bn of COVID-19 related expenditure leaves an underlying deficit of approximately €3.1bn. It should be noted that support measures were introduced towards the end of Q1 2020 and this can influence year-on-year comparisons.

In Q1 2021, government revenue of €19.5bn was 8.7% higher than the same period of 2020. This is mainly due to tax revenue which was 13.7% higher than Q1 2020 on a par with pre-pandemic levels. Within this, indirect taxes were up 23.7%, predominantly due to VAT receipts, with direct taxes (including corporation tax and income tax) up 5.7%. On the other hand sale of goods and services (reduced receipts across health, transport and local government) was down 16.4% which can be attributed to the ongoing level of restrictions, while investment income was down 10.6%.

Gross general government debt increased by €12.6bn in the quarter to €230.5bn. The increase was due primarily to the issuance of short term (€2.8bn) and long term (€6.8bn) debt securities and an increase in long term loan liabilities (€2.1bn) with a draw down from the European Commission’s Support to mitigate Unemployment Risks in an Emergency (SURE) instrument. There were also small movements in the other debt instrument liabilities, with currency and deposits rising by €0.6bn and short term loans by €0.3bn. The debt to GDP ratio stood at 60.5% at the end of the first quarter.

While EDP debt instrument assets increased by €7.2bn in the quarter, this was offset by the rise of €12.6bn in liabilities resulting in net general government debt increasing by €5.4bn. The increase in assets is due entirely to a rise in currency and deposits - the proceeds of the issuance of debt securities and borrowing under the SURE facility.

This release comprises the latest official publication by CSO of quarterly Government Finance Statistics (GFS) for the period Q1 2018 to Q1 2021. The tables provide detailed revenue, expenditure and balance sheet data for general government. The full time series is available on CSO PxStat.

The full suite of GFS publications is also available on the CSO Website.

Depreciation (P.51c):
Revisions have been made to the P.51c data in line with the latest National Income and Expenditure Accounts published on 15 July 2021.

Reclassification of local authority housing rent as non market output
To date the provision of local authority housing was treated as a market output. This meant that the difference between the differential rent paid by the tenant and a market rent was calculated and included as P.11 (market output), with a corresponding imputed expenditure D.632 (social benefit in kind). However, Approved Housing Bodies (AHB) reclassified into the local government sector are considered as non-market producers, with no imputed rent calculation made.
On review, this approach was not appropriate and thus a decision has been made to treat the local authority housing output as non-market. This ensures consistency with AHBs. This determination means that there is no longer an imputed D.632 expenditure related to local authority rent. Local authority rent payments are now recorded as P.131 (incidental sales and fees of non-market establishments). This methodology has been applied from 1995.

Movements of note in the balance sheet, Q1 2021

The value of the State's assets in Equity and Investment Fund Shares (AF.5, Table 6) stood at €36.0 billion, representing a net quarterly increase of €2.0 billion since Q4 2020. Over this period the rise in value was composed of further net acquisition of these assets of €0.2 billion (Table 5), together with holding gains of €1.8 billion (Tables 5 and 6), the majority of which were as a result of increases in the market value of Irish banks. The State’s cash holdings rose by €8.4 billion in Q1 2021 largely following increased debt security issuance and borrowing from the European Commission’s SURE facility.

The GDP and GNI* figures used in the current publication are consistent with those published in the latest National Income and Expenditure Accounts 2020 on 15 July 2021.

The population estimates used in calculating the debt per capita data in Figure 3 are the previous year's mid-April estimates of population except for the year 2017 where the 2016 census of population figure is used (see PXStat table PEA15: Annual Population Change by Component and Year).

In addition to the legally binding accounting rules set out in ESA2010 the Manual on Government Debt and Deficit (MGDD) provides further implementation guidance in the context of GFS.

General government balance is the standard European measure of the fiscal balance, which is used to monitor compliance with the Stability and Growth Pact obligations.

‘Nominal value’ is defined in the governing regulation as face value. If debt is sold at a discount, it is the undiscounted value of the instrument, rather than the amount actually received, that is shown in the GG debt. In other statistical contexts, ‘nominal value’ means face value plus any interest accrued but not paid; however, such interest is excluded from GG Debt by definition.

Detailed codes and technical definitions can be seen in the ESA 2010 manual.

Scan the QR code below to view this release online or go to
http://www.cso.ie/en/releasesandpublications/er/gfsq/governmentfinancestatisticsquarter12021/