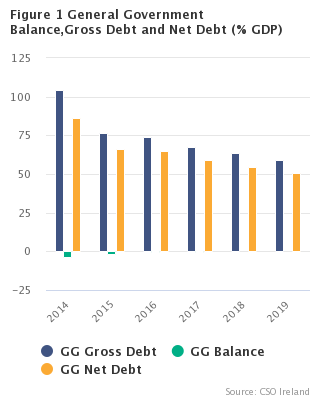 Around €501m in net terms was spent on interventions to support financial institutions during 2019, with associated interest costs partly offset by dividends and income. Investment income fell over the period 2014-2019 as the state reduced its holdings in these institutions (Table 1).

On the assets side of the state’s balance sheet, financial assets decreased by €2.3 billion during 2019. This decline was principally caused by a €3.2 billion fall in equity and investment fund shares (AF.5) that was offset by a lesser rise of €1.7 billion in currency and deposits (AF.2).

On the liability side of the balance sheet, total liabilities at market value decreased by €2.9 billion, largely composed of debt repayment (AF.3 and AF.4) in the year to end-2019 (Table 6).

This release comprises the latest official publication by CSO of annual Government Finance Statistics (GFS) results for years 2014 to 2019. The data in this release are subject to the normal verification process by Eurostat until 17 April 2020 and are therefore provisional.

The data published are consistent with the General Government Deficit and Debt levels reported at end-March 2020 under the EU regulation governing the Excessive Deficit Procedure (EDP). Consequently they may not always be fully aligned with the National Income and Expenditure and related publications such as the Institutional Sector Accounts.

The official publication by Eurostat of deficit and debt levels for all EU member states is 22 April 2020.

The full suite of GFS tables are also available on the CSO website here.

Data for all EU Member States are available on Eurostat’s database here.

Local Government Entities: New data on local government entities which were previously not captured is now included for 2016 and 2017.

Carbon Credits: The methodology for the calculation of carbon credits has been updated from 2013, which has increased D.29 and decreased AF.89.

VAT MOSS (VAT Mini One Stop Shop): VAT MOSS is a way of paying VAT on supplies of certain digital services. The VAT MOSS retention fee payable to other countries is now included as a D.74 payable from 2016.

General Government Net Worth: These revisions are due to increased availability of data (Tables 2 and 6).

Estimates of the general government debt have been revised since October 2019.  Revisions are due to improved compilation processes and, for recent years, also reflect the availability of more up-to-date and detailed data sources.

Super dividend: In 2019 Q2 the exchequer received a super dividend of €1,653 million from the Central Bank of Ireland.

IBRC payment to Exchequer: In 2013 the payment by the Exchequer of €1.1 billion to meet obligations to IBRC deposit holders under the guarantee schemes in operation was treated as the granting of a loan from the Exchequer to IBRC, on the understanding that the Exchequer would be treated as a creditor of IBRC in the liquidation process and that there was a reasonable expectation of repayment.  The 2019 repayment of €681.7 million was made in 2019 Q4.

Consultants pay settlement: In June 2018 there was a settlement made following a court process with medical consultants in relation to pay arrears.  The backdated payments of €104 million were recorded as D.99 expenditure of central government in Q3 and Q4 2019.

The value of the State's assets in Equity and Investment Fund Shares (AF.5, Table 6) stood at €33.9 billion, representing a year-on-year fall of €3.2 billion since Q4 2018. This drop in value was composed of a reduction in holdings of this asset class of €2.4 billion (Table 5) and a loss in value due to market fluctuations over the year of €0.8 billion (Tables 5 and 6). These market losses related mostly to movements in the value of shares held in Irish Banks.

On the other side of the balance sheet the State's liabilities dropped by €2.9 billion during 2019. This was mainly composed of the repayment of loans (AF.4, Tables 5 and 6) amounting to €1.5 billion, largely driven by repayments of the UK bilateral loan in this period.

The GDP figures used in this publication are consistent with those published in the National Income and Expenditure accounts published on 11 July 2019. 2019 GDP is based on the Quarterly National Accounts released on 6 March 2020, available here.

Modified Gross National Income (GNI*) is equal to Gross National Income at current market prices less the factor income of redomiciled companies, less depreciation on research and development related intellectual property imports and less depreciation on aircraft related to aircraft leasing. As GNI* is currently available for up to 2018, the rates per GNI* are only available up to 2018.

Scan the QR code below to view this release online or go to
http://www.cso.ie/en/releasesandpublications/er/gfsa/governmentfinancestatisticsapril2020/