21.7% of foreign nationals assigned PPSNs in 2010 had employment activity in Ireland in 2015 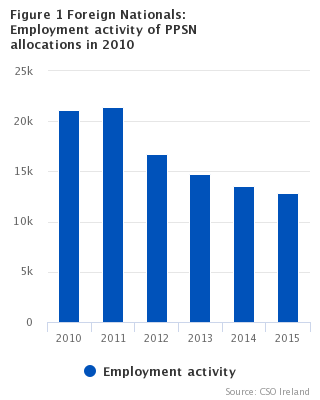 This data is based upon an annual analysis of records of the Revenue Commissioners, the Department of Social Protection, and the CSO, based on foreign nationals who were allocated PPSNs during the period 2002-2015.

Employment activity rate in year of allocation shows a 9.5 percentage point increase in 2015

Social Welfare activity rate in year of allocation increased to 9.7% in 2015

PPSN allocations to foreign nationals decreased by 1.5% in 2015

Employment Activity: Employment activity for the purposes of this release includes any person appearing on the Revenue P35 files, or in the employment file within the Central Records System of the Department of Social Protection. The level of activity can vary from having worked one day in the year to working full-time throughout the year.

Social Welfare Activity: Social welfare activity for the purposes of this release includes any person appearing in the claims files within the Central Records System of the Department of Social Protection. This includes one off claims, such as dental and optical benefits, and ongoing claims, such as Jobseeker’s Benefit or Jobseeker's Allowance, pensions and illness payments.

The results presented in this release are based on a data-matching exercise undertaken by the CSO, for statistical purposes, of administrative data from of the Department of Social Protection and the Revenue Commissioners. This study was undertaken in line with the Statistics Act, 1993, and the CSO Data Protocol governing data matching exercises undertaken by the CSO (available at http://www.cso.ie/en/aboutus/csodataprotocol/ ).

Scan the QR code below to view this release online or go to
http://www.cso.ie/en/releasesandpublications/er/fnaes/foreignnationalsppsnallocationsemploymentandsocialwelfareactivity2015/