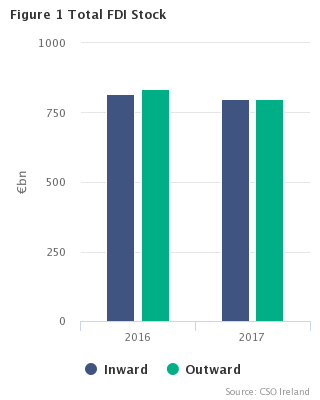 The decrease in stock of direct investment abroad between the end of 2016 and the end of 2017 - from €813bn to €717bn resulted from the withdrawal of investment from Luxembourg (-€118bn) and Offshore centres (-€12bn) which was partially offset by increased investment in Netherlands (€25bn) and US (€5bn) - see Table 3.

The Services Sector remains the largest sector for inward investment - at the end of 2017 the investment position of €469bn was down just €6bn on end year 2016 position (€475bn). Investment in financial intermediation and administrative and support activities decreased from €204bn and €64bn in 2016 to €197 and €59bn in 2017 respectively. Investment in the Manufacturing Sector decreased by €47bn to €274bn in the same period - see Table 8.

Scan the QR code below to view this release online or go to
http://www.cso.ie/en/releasesandpublications/er/fdi/foreigndirectinvestmentannual2017/